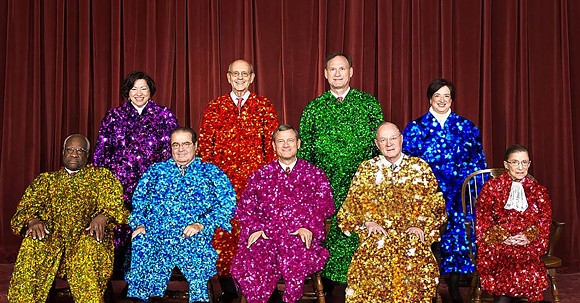 The Florida Supreme Court says the issue comes down to public trust and confidence.

And from now on, that means judges can only don solid black robes when they head into court.

Despite arguments that it doesn't need to act as the fashion police, the Supreme Court on Thursday approved a rule that will prevent judges throughout the state from wearing colorful robes or other adornments while presiding over cases. Justices said in an eight-page decision that judges "wearing different colored robes or robes with varying embellishments" could lead to uncertainty for people going before courts.

"Depending on the color or pattern of the robe or the type of embellishment worn, some may wonder whether the presiding judge is a 'real judge' or whether the judge will take the proceedings seriously,'' the decision said. "Robe color also could be seen as a reflection of a judge's mood or attitude that day. Should a defendant facing the death penalty feel trepidation when the presiding judge appears in a red robe or feel more at ease when the robe is green? The possibility that the unique attire of the judge assigned to one's case could raise these concerns and thereby diminish public trust and confidence in the proceedings is not acceptable."

While it's not clear from the decision how many judges might have ditched traditional black for something more colorful, the rule drew some opposition before it was approved.

Maybe most notably, the Conference of District Court of Appeal Judges said in a May filing that it "does not see any need" for the rule.

"The conference is not aware of any instances in which the use of judicial robes other than black robes without embellishments has been detrimental to the administration of justice, nor any inappropriate circumstances which it believes would be curtailed by the proposed rule,'' the group said.

Similarly, Broward County Circuit Judge Merrilee Ehrlich wrote in an April filing that the issue of judicial robes should be handled on a case-by-case basis. She wrote that a judge "need not be required to have the literal appearance of severity (black,unadorned robes), only solemnity."

"Historically, the respect was accorded austere, plain black judicial robes designed for my brethren, at the time, older, somber-appearing men,'' Ehrlich wrote. "I wear a simple white lace collar on my plain black robes to add a touch of femininity to the dignity of the robe. It is equally important for the Florida Supreme Court to acknowledge that we now have a diverse bench."

The court said it has "no doubt that the clear majority of judges conduct themselves in the most exemplary manner and hold themselves to the highest standards." But it said that is not the case with all judges and that the rule can help bolster trust and confidence in the judiciary.

"The public should not have to guess as to the meaning of different colored, patterned, or embellished robes,'' the decision said. "Promoting uniformity in judicial attire, by requiring all judges to wear unembellished, solid black robes, will no doubt avoid these concerns and promote public trust and confidence. The people of Florida have a right to expect equal justice every day in every court in this state, and should not have to question whether equal justice is being dispensed based on the color of a judge's robe."