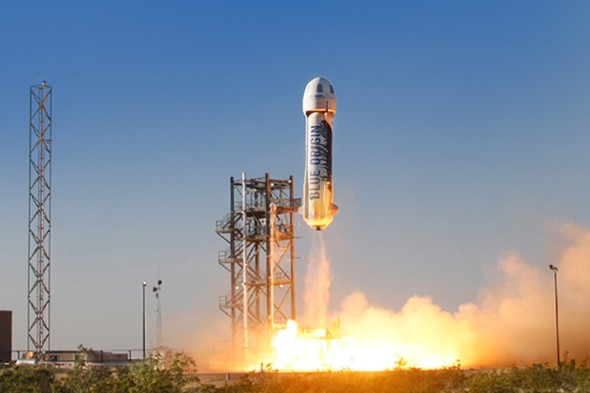 Blue Origin, the aerospace effort of technology entrepreneur Jeff Bezos, will build a $200 million manufacturing facility just south of Kennedy Space Center that will employ about 330 people in exchange for state and local incentives.

With Gov. Rick Scott on hand Tuesday, Bezos, who founded the online marketplace Amazon.com and is ranked among the world's wealthiest people, announced his project that also will use a Space Florida launch pad at Cape Canaveral.

"We'll be launching from here later this decade," Bezos said in a live-streamed event. "You will hear us before you see us."

Scott used the announcement to reiterate his push to get the state Legislature to increase funding for the economic-development agency Enterprise Florida to help drawn more businesses to Florida.

As for Kent, Wash.-based Blue Origin, the project has long been reported by the Florida Today newspaper to be Space Florida's "Project Panther." During initial public discussions, economic-development projects often are identified by code names.

An incentives package for Project Panther was discussed at Space Florida's Aug. 20 meeting to include $8 million in aviation sector work-program funding and $10 from the Florida Department of Transportation.

The private venture is envisioned as helping Florida and the Space Coast rebuild the space-industry infrastructure as NASA waits for the Space Launch System —- slated to make its first flight in 2018 —- to replace the shuttle program, which ended in 2011.

House Speaker Steve Crisafulli, a Republican from Merritt Island in Brevard County, said in a release that he looks forward to working with Enterprise Florida to bring in more companies like Blue Origin.

"Blue Origin continues to solidify Florida's position as the top destination for aerospace and aviation and will create hundreds of new jobs in our community," Crisafulli said.

State officials said Florida was in competition with at least 10 other states for Blue Origin, which has tested its New Shepard vehicle at a company facility in Texas.

The new facility will be located at Exploration Park on Merritt Island, with the company's New Shepard vehicle providing human space flights from Launch Complex 36.

The complex, which was long used for Atlas launches, is operated through Space Florida.