Yelp: It's not just for local restaurants, coffee shops and retailers, you know. You can review pretty much anything you want – review your barber, review your bail bondsmen. Or, better yet, review your local jail.

Right now, Orange County Jail (2450 W. 33rd St., in case you don't know where it is) has five reviews on Yelp. And somehow it has managed to maintain a three-star rating, despite one reviewer complaining of getting, "some crappy sandwich with the cheese still wrapped up. Would not recommend" and another advising people to "steer clear of this place."

One reviewer gives the jail one star, noting that despite the "free one-way shuttle service," the other patrons "are dreadful" and the view "was partially obscured by seemingly unnecessary architectural elements. Beyond the window a lake was visible, but it was largely overwhelmed by hideous spools of menacing razor wire."

Another reviewer, Jamie K., generously gave the jail five stars, noting that the cell "was absolutely spic and span" and the "staff was generally efficient and friendly." The cop who arrested that particular reviewer didn't fare so well – Yelp doesn't offer a way to review individual police officers (yet – you can, however, rate your local police department and the OPD has a five-star rating at the moment), but the poster says if possible, he (or she) would have given that guy zero stars for arresting him or her for passing out fliers for a nightclub.

"It was my first (and perhaps last) time in a place of incarceration," Jamie K. writes. "And I must say that I was rather pleasantly surprised with the experience given the circumstances." Thanks, Jamie K. We did find your review useful and maybe a little bit funny, too. 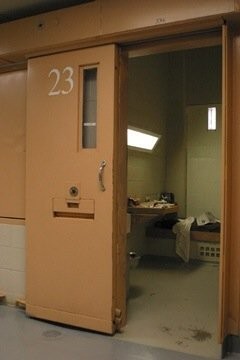