Can the return of Halloween Horror Nights' Jack the Clown silence the haters? 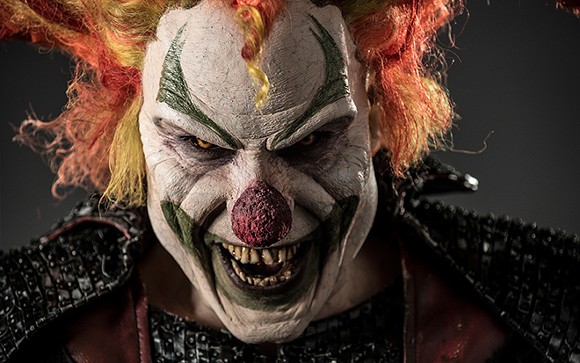 Like a bat outta hell, Halloween Horror Nights once again swoops into the City Beautiful, casting a cryptic shadow over Universal Studios. September and October in Orlando are always rife with loyal fans and newcomers alike spewing gossip and criticism on the big-budget horror event. Unfortunately, the voices have started drifting towards the negative: Phrases like “too corporate” and “sell-out” have crept into the chatter, while social media posts are trolled on a regular basis by former fans complaining of the event’s “sameness” and “lack of originality” year after year. Universal needed a jolt of something fresh to revitalize the event and quell naysayers for their 25th anniversary. In a clever turn of events, instead of looking forward, Universal Creative looked back. Back to Jack. The insane clown (who long reigned as Horror Nights’ chaos-craving Mickey Mouse) was a staple of the brand for years, and with his removal, the vibe followed in suit. Now in 2015, with a grizzled I’ve-seen-some-shit makeover, Jack makes his welcome return in a big way – and it sets the tone for the entire event. Like a comeback record from your favorite band after a long hiatus, there’s an energy, a heartbeat, permeating the brand of Universal Orlando’s Halloween Horror Nights that we haven’t seen in many years, and it’s infectious. But is a shiny throwback celebration enough to bring back the defectors? Only one way to find out!