Universal removed the Twister gift shop, is the dated attraction next? 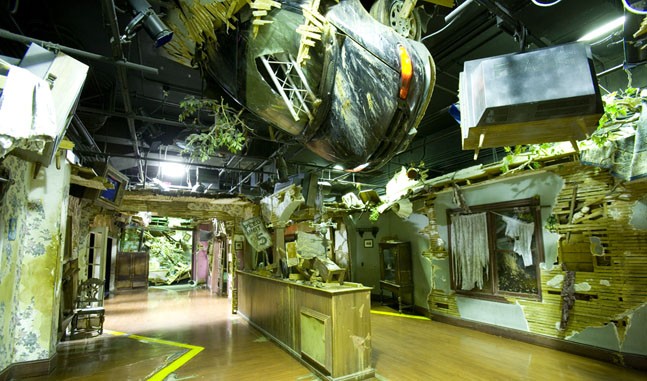 Universal Studios has gone through some major updates over the past few years, including new rides, shows and entertainment. With all of these updates taking place around the resort, many theme park bloggers have speculated on the demise of many of the older rides, including Twister…Ride It Out.

The small attraction takes up prime real estate within the New York area of the park with an intellectual property that is neither a good fit thematically nor culturally relevant. Based on the 1996 hit film starring Bill Paxton and Helen Hunt, both of whom are in the first of two pre-shows for the attraction (they famously appear on separate screens, rumored due to a feud between the two stars), the attraction replaced Ghostbusters and features a short show that guests view while standing in line.

While Universal has remained tight-lipped on the future of Twister, a recent move does give the closure rumors more legitimacy. Aftermath, the gift shop at the exit of the attraction, has recently closed and all Twister-themed merchandise has been cleared out, at least for the time being. The products, while Twister-themed, seemed to not include the dated film at all but instead consisted mostly of cow-themed items and country-themed merchandise.

Now the gift shop is filled with items for Halloween Horror Nights. Items range from T-shirts to more detailed collectible items, such as wooden stakes, that can cost hundreds of dollars. Many items in the shop sold out within the first few days, but most of these items have since been replenished. All sets from the former store are now gone, replaced with props from the past 25 years of Halloween Horror Nights.

The strong rumors of what will replace the Twister attraction include a Soarin’ style flying theater ride, Jimmy Fallon-themed show or some mix of the two, all of which would be ‘based’ in New York.