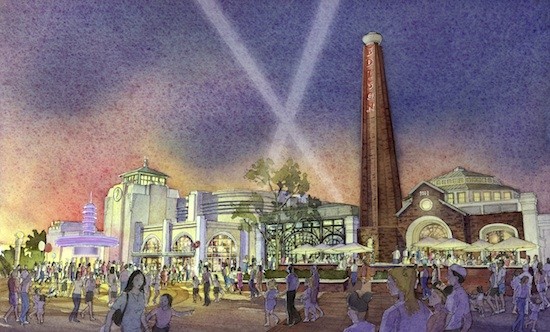 While Downtown Disney officially becomes Disney Springs on Sept. 29 the entire project will last well into 2016. A large part of the new additions to the Lake Buena Vista commercial district are lounges and restaurants, many replacing the Pleasure Island clubs that closed seven years ago this month.

The Edison, a nightly steampunk-themed entertainment establishment that will feature specialty drinks and roaming entertainers, is filling the space vacated by the famed Adventurer’s Club.

Local food critic Scott Joseph revealed new details on two of the other concepts that the same company opening The Edison will be opening in connected venues. Walt’s will be a bar and restaurant (you can probably guess who it’ll likely be themed after) that, according to the Save Pleasure Island blog, will be located in the former BET Soundstage Club next to The Edison.

Disneyland Paris currently has a Victorian-themed Walt’s restaurant overlooking Main Street. There is no word on if the one here will share a similar theme, menu or other items with the Paris one. Walt’s Place was one of the logos on the 2013 leaked document that has proven to be incredibly accurate at stating what will be coming to Disney Springs. The Edison, Morimoto, Boathouse and Food Truck Row were all on the 2013 leaked document.

The more interesting of the new establishments though, has to be what Scott Joseph is calling the Neverland Tunnels. This ‘underground’ bar/lounge will use the former utilidors that sit below the west end of the island that is now known as The Landing.

Like Magic Kingdom, Pleasure Island featured an underground utilidor complex of service tunnels. While most of those tunnels at Walt Disney World are out of public view and access the former Pleasure Island ones will soon open for the public.

The Save Pleasure Island blog has been reporting what on the same Pleasure Island utilidors; calling ‘The Tunnels Orlando’ since last winter but the Scott Joseph post was the first to give it some type of specific name. According to Scott Joseph for access to the tunnels you’ll first have to enter The Edison then go through Walt’s.

We don’t know a lot regarding the Neverland Tunnels but with the confirmed location and the Scott Joseph mentioned access has many speculating that this underground space might be some type of speakeasy that makes use of the tunnel theme. It has also been pointed out the name doesn’t really go with the new highly themed Disney Springs so it may in fact be a placeholder with a more in-theme name used once the tunnel club is announced. The 2013 leaked document doesn’t give us any clues regarding the underground bar/lounge.

Walt’s, The Edison and the strongly rumored, though still unofficial, tunnel lounge should be opened within the next year.