VIDEO: Vibrant psych act ARK on Off the Avenue

The increasingly tropical Florida groove of local psych-y synth-pop act ARK took some time to flex into its current shape. Songwriter and multi-instrumentalist Ark Calkins tinkered for years with the project to pin down exactly how he envisioned his lucid sonic dream. Begun in 2013 as Like Diamonds, the band started out doing some trial shows as a three-piece that featured soulful scene pedigree in Gerald Perez (Maximino, Thee Wilt Chamberlains) and Daniel Hanson (Fat Night, Fast Preacher), but the songs needed work, and Calkins decided to pull them back into an experimental solo project that continually wowed local crowds.

This was in part due to ARK's stylish projections that add an intense visual component to his performances, with all of his bright unusual ideas culminating with the dynamic collaboration known as Growth, a mobile stage installation that monitored Calkins' brainwaves to create a unique light show through a mind-bending design built by Katy Bradford and Winter Calkins (with the help of Royce Nephew, Anders Ackerman and Cortex, an Orlando bio-tech company). Once Calkins felt the songs were ready to be released in May 2015, he compiled them on an addicting and appealing release, Songs in the Key of I (stream below), and restructured the band to form its current lineup, which features bassist Katy Bradford, drummer Erin Butler, guitarist Bobby Hellmuth and Dave Hanson on synths alongside Calkins.

Most recently, ARK went on a kind of "desert spirit-quest" in Phoenix, Arizona, which resulted in new songs currently being worked into a new EP they expect to release before the end of 2015. We sent the band into North Avenue Studios to give you guys a peek at what's to come, with two new songs from ARK, "Queen Be" (above) and "Wren" (below). Plus, read on to find out more about Calkins' influences, equipment and other odd angles ARK employs to fill out his gorgeous sonic framework.


Orlando Weekly: Do you have any gear that helps you achieve your sound?
Calkins: I went kind of gear-crazy the last year, really beefing up my pedals. My favorite pedal is the ZVEX "Lo-Fi Junkie." It helps create some nice analog chorus sounds by manipulating waveforms and letting me control the rate and depth that the waveforms pass through the pedal chain.

What’s the best story you’ve got about a piece of gear you play with?
Uuuhhhhhh i've had the same drumset since I was 13 years old and my bass is my grandmother's. She wants it back.

Who is the best band you’ve ever seen live?
This is so tough. Ummmmm I'd say either Nas or Jim James. I saw them both at Bonnaroo in 2013 and they both were so genuine and on point musically that the performances stuck with me and probably will for a while.

What are you loving in the music world right now?
I'm kind of all over the place with music right now. I'm really digging the stuff that Unknown Mortal Orchestra just put out, Multi-Love. I'm also really excited about some weirder, heavier stuff from artists like Viet Cong and Krill. And I can't seem to stop listening to stuff off of Soundway Records. They put together compilations of Afro-Cuban/Tropical/pop stuff from around the world. Upbeat, psych-y groovy stuff.

What do you think is important in a live performance?
The energy is the most important. Not only the energy from the crowd or from the performers, but the exchange between the two. There's a level of magic in that exchange that has to be subtly read in order to be effective. I love it.
Explain the meaning behind one of your songs.
One of the songs we'll be doing for Off the Avenue is called "Queen Be." This song is about those times when I really want to help people by telling them how to make their lives better and the realization that, honestly, it's not my place to tell anyone anything. I mean, right?

Which band would you most want to tour with, past or present?
BAAAAAAAAANDSSSSS. Past or present, eh? I'll say LCD Soundsystem because every night would have been incredible. And I know they'd likely end the night in a tame manner, which is sorta my M.O. Or, Talking Heads. Because I'm obsessed.

What label do you think your music fits best on?
Secretly Canadian.

What’s your favorite city to play in?
I haven't played in many other cities with ARK, but in past lives I've really enjoyed playing shows in Tampa. The city really appreciates live music and shows it.

What’s the first album you remember really treasuring?
Running with Scissors by "Weird Al" Yankovic. I know that sounds kinda ridiculous, but I listened to this album ALL THE TIME when it was released. I remember listening to it for nearly a year or so. 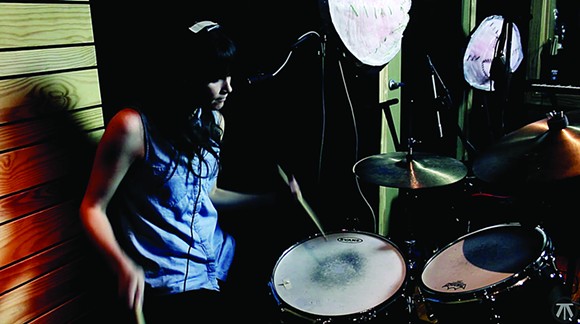 What album have you listened to more than any other album? What keeps you coming back?
DEFINITELY Graceland by Paul Simon. I can always listen to that album, front to back. Just everything about it, ya know? The tonality, the rhythms, the message, the harmonies. If I could exist as a collection of songs, I'd be Graceland.

Which comes first: the lyrics or the music?
For me, it's lyrics absolutely last. I tend to create sounds that accent the music (notes, timbre, etc.) and then after I have the best sounds there, I'll replace those sounds with lyrics that match the same cadence and timbre.

What’s the best live music video you’ve seen?
Definitely anything from Stop Making Sense. In particular, "Life During Wartime was pretty intense." The energy was off the charts.