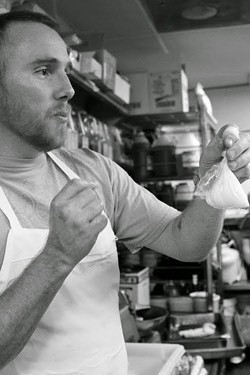 Looks like Maddey's Craft & Cru, the long-awaited concept by talented local chef Jason Schofield (of the now-closed Wolfies Pizzamia and current This N That Eats), finally has a place to call home. Maddey's will move into the space previously occupied by Chicago's Stuffed Pizza on Church Street in the Bumby Arcade. The space also housed Brick & Fire Pizza and the still-missed (by me anyway) Absinthe Bistro. At Maddey's (named after his daughter Maddelyn), Schofield will fuse his penchant for comfort classics with postmodern techniques to bring such dishes as short ribs with glazed onion, lengua lardoons, and truffled purple yam mousse, and delicate fazzoletti with whey broth, ricotta, and EVOO. Expect wood-fired artisan pizzas as well as snout-to-tail preparations.

The cellar is arguably one of the most inviting spaces in the city, and Schofield plans on turning it into a cocktail lounge called Fine & Dandy. Scott Wenger, of BE-1 Concepts (Boca Hyde Park, Park Social), will oversee the cocktail program at Fine & Dandy.

Schofield anticipates opening Maddey's by mid-March 2016. Above and below, a couple of photos from the Maddey's Craft & Cru pop-up dinner hosted at East End in May.