The recent Random Encounter 10th anniversary show (Oct. 3, Backbooth) was proof that the nerd scene is a juggernaut in this city. The energized turnout made the affair less like a typical concert and more like a mini con – costumes, props, social awkwardness and all.

I’m not gonna beat up too much on the music because it’s neither the totality nor the priority of nerd shows like this, even though openers Marc With a C and MC Lars are quite decent. Tampa’s Peter Pepper, for example, was kind of terrible, like an even campier Orgy. But the band’s big on showmanship, and underneath all the corn and cheese is some real charisma in the flamboyant frontman of the same name. Though not much of a singer, he is a real performer with the antics and attitude of a rock star. You still have to be oriented toward that aesthetic to buy into it, but the guy puts on a show. 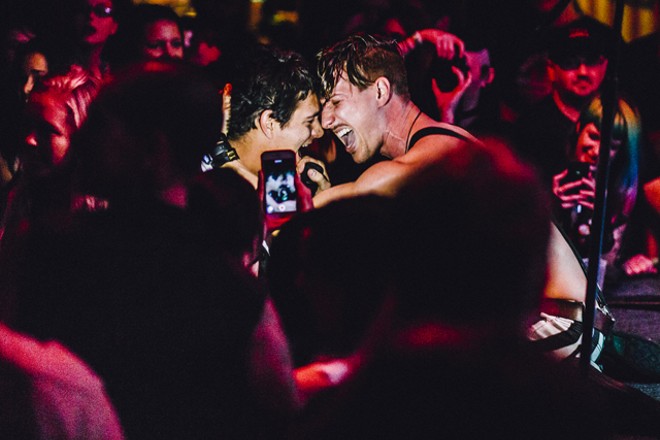 Headliner Random Encounter is neither the only nor the best band around based on video games. Still, they know their crowd’s buttons and are built for fun and maximum geeking. And in terms of show, this beloved local group throws big, wildly interactive rock spectacles. Nerds aren’t renowned for their party prowess, but that might change if enough people attended a Random Encounter show. You can’t even conceive what kind of insanity is uncorked when they rip their dual-accordion-propelled cover of A-Ha’s “Take on Me” unless you’ve witnessed it. Seriously, bananas.

The acts weren’t the best technical performances, and the music’s not art, but the nerd scene is a pure and total socio-cultural movement with a true freak streak.