We all thought today would be the Day the Drive-Thru Stood Still, but we were wrong. Dead wrong.

Today, McDonald's stores started serving breakfast all day, and what we thought was that meant that the entire breakfast menu would be served all day. This, we've now learned, is not the case.

About 10 percent of McDonald's stores won't be serving hash browns all day (McMuffin and fries, anyone?) because of some unintelligible, cockamamie reason given by franchise consultant Richard Adams via BuzzFeed: "Hash browns are cooked in the same fry vats as french fries, so some stores will need to remain fry-only once breakfast hours are over."

To add to the fast-food disappointment, the single best breakfast sandwich McDonald's has ever created, the McGriddle, isn't even on the all-day breakfast menu on the chain's website. Why, McDonald's? Why are you depriving us of the salty-sweet deliciousness of your most caloric breakfast offering? No one wants to eat a full set of Hotcakes and Sausage in their car on their way to work, yet your pocket-sized full breakfast (pancakes, syrup, egg, sausage in one!) is inexplicably left unavailable? It defies logic.

Last thing and then I'll shut up and eat my Egg White Delight McMuffin™ quietly in a corner: Not all McDonald's locations will serve biscuits, either. Menus will vary based on customer preference, and that means you won't find a Sausage Biscuit just anywhere on the all-day menu. McDonald's released a map in Nation's Restaurant News showing the dividing line between Biscuit States and McMuffin States. 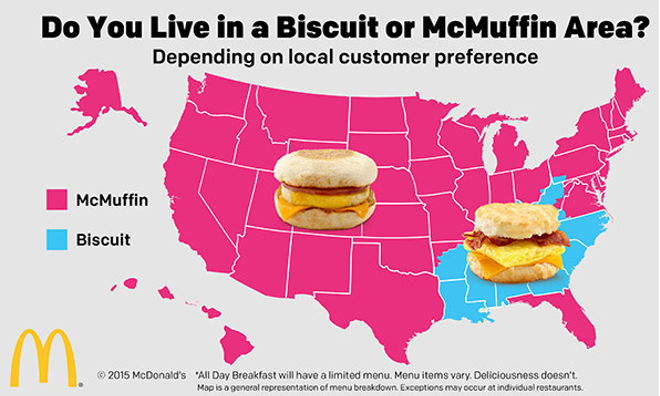 If nothing else, this settles, once and for all, whether Florida is "The South" or not. No biscuits for us.