Lil BUB, the tiniest permakitten with the hugest following, drops her first album this year and the cover artwork was painted by one of Orlando's very own, the great Johannah O'Donnell. Pre-orders for Science & Magic started today, though the album won't ship until Dec. 4. (Pitchfork already has the tracklisting.)

Here's some video of BUB in the studio:


Although BUB guested on Meow the Jewels earlier this year, her debut album is not, in fact, a compilation of the six-toed, goggle-eyed, toothless dwarf kitten's squonks and squirggles. Andrew W.K. wrote the press release explaining how Science & Magic came to be:

What you (will eventually) hold in your hands is the first ever collection of songs officially made by Lil BUB. That's right. This is music made by a magical space cat. How is that possible? Allow me to explain …

My name is Andrew W.K. and I have had the privilege of working with BUB and making music with BUB and even holding BUB in my arms. Not only is she the softest creature I have ever encountered, she is also the most musically and compassionately gifted. The songs on this album are her vision. They are by her, about her, and are her. Listening to these songs is the sonic equivalent to holding Lil BUB in your own arms.

It may seem impossible that a cat could compose an entire album of carefully crafted instrumental music, but BUB is not simply "a cat". She came from the deep unknown, on an intergalactic mission to help the people and animals of earth with her magic, talents, and otherworldly wisdom. I can attest to her power – the time I spent with her absolutely made me a better person.

The songs on this album are the soundtrack to BUB's universal adventure, and a soundtrack to the universe itself. You'll feel transported by the music's stimulating spirit, and taken to places beyond your imagination's limits, all the while experiencing the sonic aura of BUB's loving and compassionate presence.

BUB is more than just a "muse"; she wrote this music and used the musicians on this album (BUB's dude, Mike, and his close friend Matt, who is also the official bubbysitter), as her creative vessels to get the music from inside of her spirit and into your mind. If it weren't for BUB, this music would not exist. 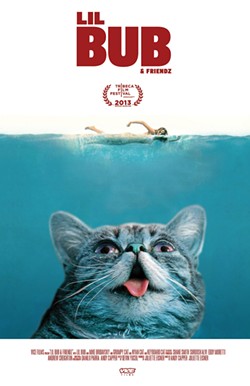 If you've never heard of Lil BUB man I don't know, you have a lot of catching up to do. You can start with the movie Vice made a couple of years ago, Lil BUB & Friendz, or with her Tumblr, her YouTube channel, her Instagram feed, or her talk show (the best episode is the one where BUB interviews Steve Albini in his studio). Her book, the products in her online store, and the semi-regular art shows focused on BUB all raise money for shelters that rescue cats with special needs, like BUB. (As will the album – 25 percent of sales go to Lil BUB's Big Fund.)

O'Donnell participated in a couple of those BUB art shows, a few of her paintings are in Lil BUB's Lil Book, and she also helped design the poster for the Vice movie (right). She kept in touch with BUB's dude, Mike Bridavsky, who hit her up recently.

"Bub's dad contacted me a few weeks back to see if they could use my painting for the album cover. Of course I said yes!" O'Donnell says.

We couldn't help asking: "Have you met Bub?"

"Nooooo! I wish!" she says. Well, they say it's good to have something left to strive for. We just think it's dope that Orlando is on the cover of BUB's debut album.