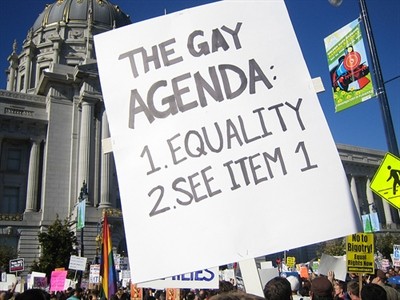 Today, the legislative body's Civil Justice Subcommittee voted 9-4 to move a bill being called the "Pastor Protection Act," which would make it law that churches and religious organizations "not be required to solemnize any marriage, or provide services, accommodations, facilities, goods or privileges for related purposes if such action would violate a sincerely held religious belief."

You can read the full text of the bill, introduced by Rep. Scott Plakon, here.

When Plakon first introduced the bill – after a Clermont megachurch minister started an online petition asking for one, modeled on legislation that's already passed in Texas – he said he wanted to make it "absolutely clear" that religious leaders should not be expected to perform gay marriages in the wake of the Supreme Court's decision that marriage between same-sex couples is legal in the United States.

Here's the thing, though: The United States Constitution already makes it "absolutely clear" that religious leaders can't be forced to do so. It's called the First Amendment, and it "prohibits the making of any law respecting an establishment of religion, impeding the free exercise of religion."

Although Plakon has told the media that this bill is not meant to be "reactionary," and that he's just looking for an "extra layer of protection" for religious types who are afraid they're going to be forced to preside over gay weddings, the real rationale behind the bill appears to be just that: A reaction to the fact that gay marriage is real, and it's happening despite desperate attempts to pretend that it's not (see: Kim Davis).

Today in Tallahassee, a group of religious leaders spoke out against the Pastor Protection Act, noting that they do already enjoy the protection of the First Amendment and that, if anything, this bill seems unnecessary. Perhaps even mean-spirited.

“Look at the true intent of this bill,” the Rev. Harold Thompson of United Church of Christ in Miami Beach is quoted as saying in the Palm Beach Post today. “It’s not to protect the pastors or protect the churches, it’s to protect an agenda.”

According to various news reports, the debate in the Capitol today quickly went to an ugly place. One blog quotes Chris Walker, a pastor at the Clermont megachurch that started the online petition to get the Pastor Protection Act in play here, as saying the following:

“They have their right to be married and that’s fine, they have their license to play house, but we’re going to preach the bible, and we’re not going to be held accountable for preaching the truth, because truth is now the new terrorism."


Right. Not reactionary at all.

Equality Florida quickly sent out alerts about the hearing, noting that not only did the bill pass the committee along party lines (All Republicans were in favor, all Democrats opposed), the discussion turned from being about the merits of the bill and "quickly became about marrying (or not marrying) same-sex couples – an insulting idea that faith leaders need to be protected from the LGBT community."