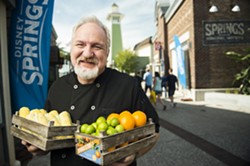 Art Smith is no stranger to the limelight – he gained fame as Oprah Winfrey’s personal chef, appeared on Top Chef and Top Chef Masters, has won two James Beard Awards, is involved in numerous restaurants, and has cooked for many heads of state, including heads of this state Jeb Bush and Bob Graham.

Now he’ll be a part of the Disney family when his latest restaurant venture – Homecoming: Florida Kitchen and Southern Shine – opens in Disney Springs next summer. (All this while raising four kids with his longtime partner Jesus Salgueiro.) We spoke to the affable chef about his Disney venture, and discussed food trends, faith, same-sex parenting, pork, vegan-friendly restaurants, and Vladimir Putin.

OW: Your new restaurant – Homecoming: Florida Kitchen and Southern Shine – is quite a mouthful. Why the long name?
AS: [Laughs] I just call it "Home" for short because I'm back home in Florida. I'm a sixth-generation Floridian who grew up on (and still owns) our family's ancestral farm in Jasper, Florida. We ate from the garden, raised our own chicken, pork and beef, and my great-grandfather made moonshine.

OW: How often can we expect to see you in the kitchen?
AS: I'll be there every month. I'm a Florida resident and, in fact, I live here. I have a home nearby at the Mystic Dunes Resort. No, I don't play golf, but maybe I should?

OW: What is it you hope to showcase to international visitors dining at your restaurant?
AS: That Walt Disney World is in the Sunshine State and they need to taste Florida when they visit. I want to showcase my Florida: oak trees, Spanish moss, the Suwannee River, cool crystal-clear springs, fried chicken, chicken ‘n’ dumplings, a mess of greens, every field pea known to Southerndom, lots of barbecue, and endless sides.

OW: What one dish and drink will be an absolute MUST at Homecoming: Florida Kitchen and Southern Shine?
AS: Dessert. I’m building a bakery in my quaint little hometown of Jasper. It has less than 2,000 folks. They once baked a 12-layer chocolate cake for President George H. W. Bush – well, they’ll bake it again for Walt Disney World daily from the bakery I’m building. I’m training future bakers, too. And moonshine, chilled on the rocks or served with fresh-squeezed Florida orange juice, or spiked in iced tea with fresh mint plucked from our garden.

OW: What do you feel you can bring to Orlando's burgeoning food scene?
AS: I’m excited to bring my philosophy that a food can not only nourish folks, but be used to elicit great change. We will have an Orlando chapter of Common Threads (Smith’s charity focused on educating children on cultural diversity, nutrition and physical well-being through cooking and the arts), as well as a chapter of my accredited garden-to-kitchen school, the first in the South.

OW: What restaurants do you frequent when you're in Orlando?
AS: I adore Via Napoli at Epcot and love the eggplant parmesan and adore chef Joe Darrigo Jr. Ravenous Pig – sweet, scruffy kids and great food. I love, adore Sushi Pop and Cress Restaurant in nearby DeLand. LOVE the chef! [Chef Hari Pulapaka] has helped us with Common Threads and is a dear genius of a man!

OW: When you're not immersed in the world of Southern cookery, what cuisines do you gravitate towards?
AS: I love Southeast Asian, Italian and Middle Eastern cuisine.

OW: Any future expansion plans?
AS: Naples, Florida, in the coming weeks. The restaurant – Naples Y'all and Si Bar by Chef Art Smith – will be Southern American with an Italian accent.

OW: How do you juggle raising 4 kids and jet-setting between the 19 restaurants you own or are a partner in?
AS: Having semi-free-range kids in a small town helps. So do three nannies, Grandmother Addie Mae and tons of relatives. It takes the whole town of Jasper.

OW: Your children were the first from same-sex parents to have their baptism blessed by Pope Francis and performed at Holy Name Cathedral in Chicago. How did that come about, and why was it important for you to have your children baptized into the Catholic faith?
AS: My Jesus is Catholic. I’m Southern Baptist. I love Pope Francis and we love the new Cardinal of Chicago. I love the ceremony and always felt God in the majestic Catholic Church. They love and adore us and insisted that it be there. Pope Francis even gave each child individual signed blessings.

OW: Worst food trend?
AS: Pork! I am porked out. We need more plant-based menus and vegan-friendly restaurants, which Homecoming will be.

OW: Next cuisine to hit it big?
AS: Vegan.

OW: What famous person were you most nervous cooking for?
AS: President Nelson Mandela. He was such an iconic figure. Oprah teased me that I was star-struck.

OW: One person you really want to cook for?
AS: The Pope one day, but how about someone complicated like President Putin? Maybe I could turn him? [Laughs] Food has power! I’m a chef with the State Department’s Diplomatic Culinary Partnership. I’ve cooked in Israel and in Palestine. I’ve cooked in the Baltic States, and I’ll be cooking for Mariela Castro [Raul Castro’s daughter] in Havana, Cuba. I love her commitment to equality. More food, more love. When all else fails, feed them!