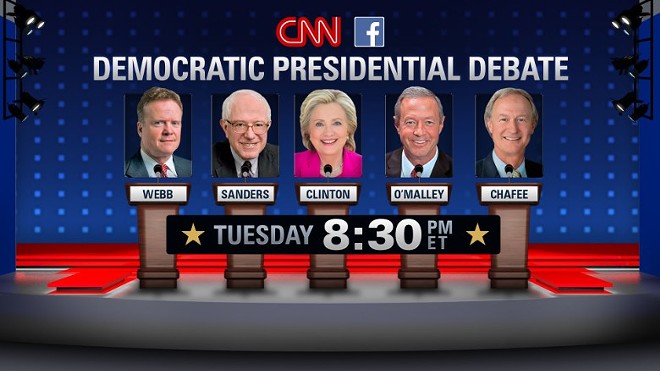 The first Democratic presidential debate is tonight, and you know you'll need someone to kvetch to about it after it's over. So don't watch it alone! Here are some of the Democratic debate parties planned in Orlando tonight – there's one just for Hillary Clinton, two for Bernie Sanders and one that's for everybody (especially those of you who're hoping that maybe Vice President Joe Biden decides to take part and makes a surprise appearance onstage – seriously, they're keeping an empty podium open for him just in case). The debates will air on CNN starting at 8:30 pm.

Hillary for America Debate Watch Party: Hammered Lamb, 1253 N. Orange Ave.; party starts at 8 pm
Tonight's your chance to tip 'em back with some local politicians. According to Hillary for America, Florida Sen. Bill Nelson will be at the event to watch the debate with other Hillary Clinton supporters; the Facebook event page says Orlando Mayor Buddy Dyer will be there, too (although his office tells us he's going to be at the second Orlando Speaks event this evening; his campaign was unable to confirm whether he'd make the debate watch party). If you need a few talking points should you find yourself belly up to the bar with one of them, Buddy is currently up for reelection against Tea Party-backed Paul Paulsen and Bill Nelson was once an astronaut! You'll have a lot in common.

Knights for Bernie: Jandala’s Brazilian Kitchen and Bar, 4498 N Alafaya Trail, $10 admission; party starts at 7 pm
This event is only open to ticket holders, and you can buy tickets at the Knights for Bernie booth at the UCF Student Union the day of the event. For $10, you get dinner, a drink and access to the party. Knights for Bernie takes over the entire restaurant and plans to serve a "Feel the Bern" cocktail.