Review: 'One Man Star Wars Trilogy' is a hyperspeed blast of wit and wild energy 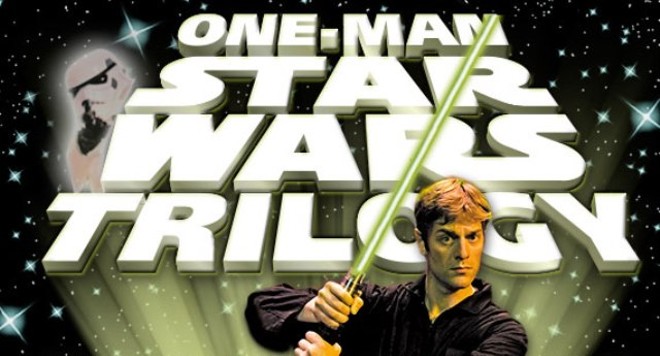 With new toys filling the shelves, new theme park attractions under construction, and a new sequel hitting theaters in December, we’re currently in the middle of the biggest Star Wars resurgence since the first prequel was released in 1999 (and we all remember how that turned out). Whether you want to get pumped for The Force Awakens or just want to relieve how awesome the original films were – with the benefit of snarky hindsight – there’s no better way to travel back a long time ago to that galaxy far, far away than with Charlie Ross’s One Man Star Wars Trilogy, playing now through Oct. 18 at the Dr. Phillips Center’s Alexis & Jim Pugh Theater.

Canadian writer-actor Ross, with the aid of director T.J. Dawe, has distilled the original three Star Wars films down to their essence in this hourlong show, which he breathlessly blasts through at hyperspeed aided by nothing but a black jumpsuit and a handful of lighting effects. If (like Ross’s father) you can’t tell Captain Solo from Commander Spock, this might not be the show for you, since large chunks of the plot are left by the wayside. But unless you’ve been living on Tatooine for the past four decades, the dead-on invocations of George Lucas’ iconic characters, John Williams’ epic score, and Ben Burtt’s unmistakable sound effects should bring a Sarlac-sized smile to your face.

Ross’ whiny, feathered-hair Luke Skywalker impression is eerily accurate, and if he doesn’t exactly impersonate all the original actors’ voices (his Lando Calrissian sounds suspiciously like Vinnie Barbarino), his mastery of their vocal rhythms is uncanny; Ross’ pacing and pauses match the films’ line readings precisely, and his R2-D2 beeps are pitch-perfect. Even better are his physical impressions of the saga’s creatures and contraptions; watching this gifted physical actor recreate the collapse of an AT-AT is like witnessing a fine piece of post-modern dance.

But the real joy in this show for lifelong Star Wars fans isn’t just in Ross’ re-creation of the films, but his subtly sarcastic (though still respectful) commentary on them, whether breaking the fourth wall to tweak the expository opening crawls, evoking Chewbacca’s disappointment at being denied a medal after helping destroy the Death Star, or slipping a Natalie Portman/Black Swan reference into an emotional moment between Luke and Leia.

It’s been more than 12 years since Ross’s One Man Star Wars Trilogy had its U.S. debut inside downtown’s old SAK Theatre during the 2003 Orlando Fringe. In the years since, he’s gained official sanction from Lucasfilm, but lost none of his wit and wild energy; by the middle of The Empire Strikes Back, you’ll be placing bets on when he’ll have to stop and take a breath. (Spoiler: He doesn't.) Between Yoda’s horsey whinny to Vader’s pee-inducing penchant for Force-choking subordinates, there’s something here to please every Jedi or Sith. Dispatch your Bothan spies out immediately to secure seats now, and don’t worry – it’s NOT a trap!