DeYarmond Edison is an early 2000s Wisconsin band you may not have heard of but whose splinters you probably have. From the cinders of their 2006 dissolution emerged the phoenixes Bon Iver, Megafaun and Field Report. That last one is the vehicle for Chris Porterfield, who just made his first Orlando appearance solo (Oct. 15, The Social). 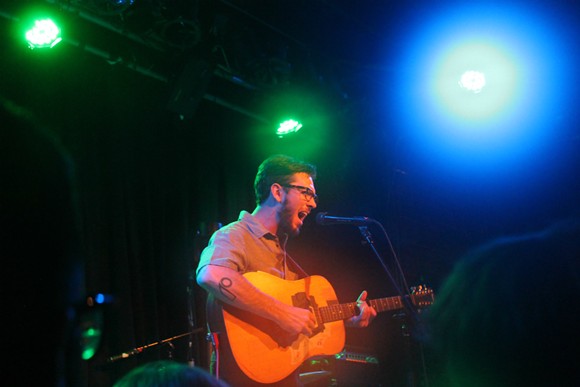 Field Report – which is less impressionistic than Bon Iver and less outlandish than Megafaun – is definitely the most pop-oriented of the three brother bands. That said, Porterfield’s indie-folk songs also sigh a hushed Northern kind of beauty, blowing down cool, lonely and yearning like a Great Lake breeze. That their muted shimmer translated with little loss in shine even without a full band shows that the music’s center of gravity is the quiet power of Porterfield’s voice.

The performance of headliner Noah Gundersen, however, was a mind-changing revelation. Musically and emotionally, this Seattle singer-songwriter paints in subdued hues. On record, the huddled bedroom vibe can sometimes be so subtle as to be barely there, on the verge of evaporating like an early morning reverie.

But live, it’s a very different experience. Music that seemed pleasant but ephemeral was revealed to be deep and sweeping when played at volume and with powerful intent by a good, well-furnished band. What often receded into the wallpaper – gentle edges of gospel, soul and country – sprang to sudden life and purpose. And it culminated in one of the most enveloping soft shows I’ve seen in ages, a polished, full-mast and gorgeous performance that will forever change the way I hear his recordings.