Former Gov. Charlie Crist to run for Congress in Florida's District 13. Yes, as a Democrat.

by Dara Kam and Brandon Larrabee, News Service of Florida 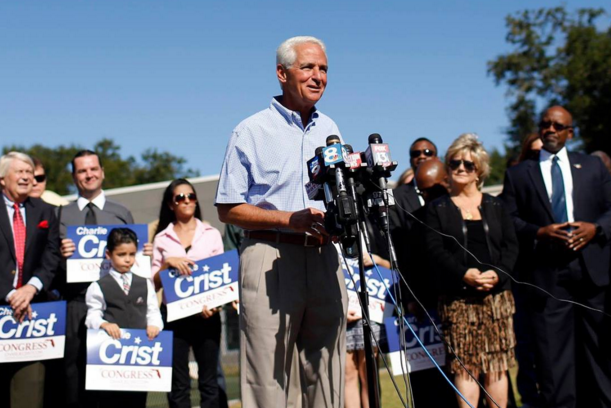 Former Florida Gov. Charlie Crist is staging another comeback, this time in a bid for a newly crafted congressional district in Pinellas County that appears tailor-made for the political phoenix.

The Republican-turned-independent-turned Democrat made the widely expected announcement Tuesday in his hometown of St. Petersburg, a year after narrowly losing to Gov. Rick Scott in an attempt to return to the governor's mansion.

"Public service is in my heart. I can't help it. I guess that's fairly obvious," he said.

Crist served as governor, attorney general, education commissioner and state senator as a Republican before losing a 2010 bid for the U.S. Senate as an independent. He later registered as a Democrat and drew heavy support from party leaders during the 2014 gubernatorial race.

Crist, accompanied by his wife Carole for the announcement that he would enter the 2016 congressional race, grew up in St. Petersburg and beat Scott by nearly 40,000 votes in Pinellas County last year.

Characterized by even his harshest critics as one of the state's most polished retail politicians, Crist played up his local connections in a telephone interview Tuesday afternoon with The News Service of Florida.

"The best way to describe it is that it truly is home, and it's like coming home," Crist said."Having the opportunity to represent these people. ... It's where my family live. It's where I grew up. It's where I went to elementary school. It's where my sisters were public school teachers, my dad a family doctor. It's home in every sense of the word."

Republicans quickly issued a news release with an image of a tweet posted by Crist in March in which he said, "I will not be seeking office in 2015 but I will be working alongside my fellow @FloridaDems."

"With two statewide losses and a reputation of flip-flopping when convenient, Charlie Crist is once again focusing on advancing his personal political ambitions and not the best interest of Florida families," Republican Party of Florida spokesman Wadi Gaitan said in the release.

Crist said he made the decision to enter the race in Congressional District 13 following the Florida Supreme Court's ruling in July that a congressional map approved by the Legislature violates the state's voter-approved ban on political gerrymandering.

The seat is currently held by Republican Congressman David Jolly, who has opted to run for the U.S. Senate next year rather than seek re-election.

The district is one of several set to undergo significant changes after the Supreme Court's ruling. The court still has to decide whether to approve a map recommended by a Leon County judge or go with one of six others proposed by lawmakers, voting-rights organizations and a group of voters.

But all of the plans have the same design for Congressional District 13, which will include all of St. Petersburg. The Supreme Court struck down a configuration of a neighboring congressional district, based in Hillsborough County, that spanned Tampa Bay to grab voters from St. Petersburg in hopes of creating a district where African-American voters could elect a candidate of their choice.

The proposed District 13 leans more strongly toward Democrats than the current one, a swing seat that has frustrated Democrats in recent cycles. President Barack Obama carried the proposed district by almost 10.7 percentage points in 2012; the current seat backed Obama by less than 1.5 points.

From St. Petersburg, the district reaches north through Pinellas County, through most of Clearwater.

"The Supreme Court changed the political landscape in Florida, as we all know. This district looks like it will include Carole's and my home, and it is my home," Crist told the News Service.

Crist said he has "a pretty good idea" that the district will not change significantly, even if the Supreme Court rejects a proposed map recommended by Leon County Circuit Judge Terry Lewis.

"That's why I went ahead and announced today. This race is just over a year away. It takes time to mount an effective campaign. I understand that. I just felt in my heart it was the right time to do it," he said.

Crist's campaign will be headed by Matthew Van Name, and Stephanie McClung will serve as finance director. The staff also includes Katie Bohnett, Franco Sarto and Kevin Cate, who all worked on Crist's 2014 gubernatorial effort.

Historically, Crist has fared well in the district, but the proposed changes could boost his chances for success even more.

In his 2010 bid for the U.S. Senate as an independent candidate, Crist carried the proposed district by 5.1 percentage points in a three-way race, while the existing district went for Crist by less than 2 points.

In either case, the last GOP candidate for governor or president to carry the seat was when Crist ran for governor as a Republican in 2006.

But Crist is not a shoo-in for the Washington post.

Democrat Eric Lynn has already raised more than $500,000 and garnered the support of numerous local groups.

"Since day one, I've been in this race to serve as a voice for the people of Pinellas County. This is my hometown. I'm a St. Petersburg native, a lifelong Democrat, and I know what issues are important to the people of this district: the economy, jobs, national security, veterans, health care and women's rights, just to name a few," Lynn said in a statement following Crist's announcement. "Voters need a fresh face, someone with new smart policy ideas who is eager to make a change and fight for them in Washington. I'm confident I will be just that for my fellow Floridians, and I'm looking forward to a spirited primary on important Democratic issues to prove it to them.”