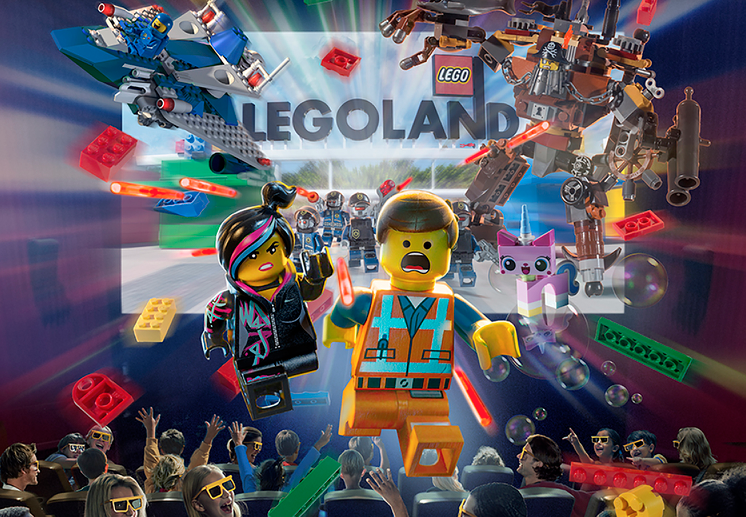 Merlin, the parent company of the Lego themed attractions and parks around the world (and of the Orlando Eye), announced details of a new “The Lego Movie” based 4D attraction that they’re planning to roll out globally. The new 4D attraction will be called “The Lego Movie 4D: A New Adventure” (such an original name) and will feature the typical gags that 4D theaters are known for, including smoke, wind and water effects.

The film, inspired by the smash hit The Lego Movie, reunites most of the star filled original cast (sadly Chris Pratt seems to be missing) and introduces a new villain, “Risky Business,” who will be voiced by Patton Oswalt. The short film is written by Adam Pava while Rob Schrab directed and co-wrote. Schrab is also directing the box office sequel to The Lego Movie, which will debut in 2018.

The new 4D film picks up on where the original film left off. Emmet (originally voiced Chris Pratt), Wyldstyle (Elizabeth Banks), MetalBeard (Nick Offerman) and the other characters visit a mysterious theme park that features rides based on the adventures the team experienced in the original feature film.

The international debut of the 4D film will take place at Legoland Florida on Jan. 29, 2016. It will then open at Legoland California on Feb 6 and will roll out at the other 4 Legoland parks and 11 Legoland Discovery Centers in Asia, Europe and North America over the following few months.

The Lego Movie already has a strong presence in the Legoland parks. By some estimates Emmet has now proven to be a more popular meet-and-greet character than even Buddy, the original Lego character (Lego’s Mickey Mouse, if you will). Legoland California also has an attraction in their Heartlake City Theater that gives a sneak peek into how the feature film was made, including numerous models used to produce the film.

Legoland Florida has been on a roll lately with a steady stream of successful additions; including the new Heartlake City land and the opening of the lakefront Legoland Florida Hotel earlier this year.