Today's best news: The humans behind Hanson's Shoe Repair are opening a new downtown bar, which they hope to have open by end of November.

We dig the Hanson's crew's simultaneous appreciation for cocktail history and architectural history, but the real reason this is the best news ever: The bar will be directly behind the Orlando Weekly offices, through the parking lot between us (in the historic Tinker Building) and the UCF Downtown Campus Ying Academic Center (in the historic Carey Hand Funeral Home building).

Bartender Rene Nguyen filled us in on the location of the new joint, which isn't as hidden as Hanson's but is also kinda twisty to find:

"We're opening up … where the old Sound Bar space used to be. It's going to be called Herman's Loan Office. Same approach to cocktails as Hanson's but different enough to stand on its own."

We've got a picture of the entrance above (which was styled as 33 1/3 W. Pine St. when it was Sound Bar, but that seems like a made-up address; we are on the same side of the street directly in front of this building, and our address is 16 W. Pine St.), above, and below, a screengrab of the Google Maps street view that shows the original "Herman's Loan Office" tilework at 27 W. Church St. 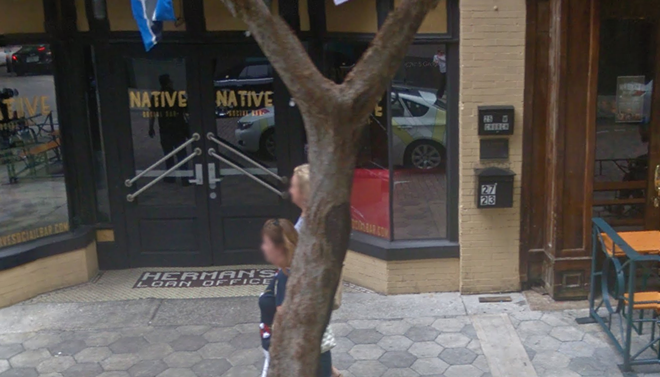 If you are interested in learning more about these historic buildings, here's a link to the City of Orlando Historic District Walking Tour Map. We're No. 14, UCF's Ying Center is No. 15, and we're pretty sure this bar is opening in the back of No. 10, the Nicholson-Colyer Building at 27-29 W. Church St.: "This late Victorian structure was built for J.A. Colyer, an African-American tailor, and J.E. Nicholson, a Canadian baker, in 1911. This is one of the few properties located outside the City’s traditional African-American neighborhoods that was owned and operated by an African-American."

On the other hand, if you're more interested in the cocktails, here's a link to our Bar Exam for Hanson's; Herman's should offer much the same approach.