Last week, a friend pointed something out to local designer Victor Davila: an ad for the Paul Paulson campaign with an illustration that bore a suspiciously strong resemblance to Davila's own work. Davila did not grant the campaign permission to use the illustration, nor was he compensated for its use.

"Its use by the campaign came as a complete surprise," Davila says. "A friend … saw Mr. Paulson’s ad in the Orlando Weekly and recognized it as my work. He sent me a text with an image of the ad and that’s the first I’d heard of Mr. Paulson or seen the graphic used on his promotional items."

So this wasn't a case of the campaign asking permission, being denied, and using it anyway (which is more common than it should be)? No, says Davila: "I was never approached by the campaign beforehand to ask permission if they could use it."

Davila says the design was originally intended as a possible T-shirt for the Orlando chapter of AIGA, the professional association for design. "In the end, I didn’t submit it for consideration to be used in the T-shirt, but still displayed the graphic on my personal website, as well as the portfolio sites Dribbble and Behance. In fact, there are two versions of the graphic on Dribbble, one with the AIGA logo and another with my personal icon," Davila says.

"After reaching out to the campaign, we were told the graphic came up in a Google search (I’m not sure exactly the keywords they searched for) and they liked it enough to use it. They removed the bottom area that either had the AIGA logo or my own, and have apparently used it on the campaign’s website, embroidered caps, lawn signs, ads and other promotional materials." 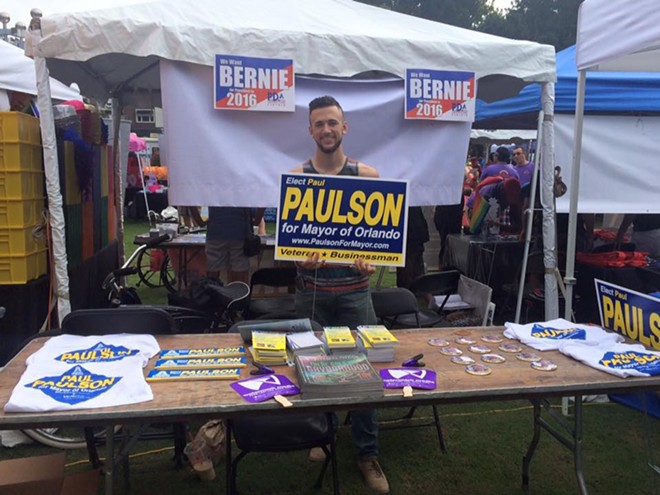 Davila continues, "When I first found out about it, I was shocked and frustrated, but I reached out to the campaign to get their side of the story. I have offered them a post usage license for the image to serve retroactively, but haven’t come to an agreement yet."

We reached out to Davila about this situation last week, but Davila didn't respond to our questions until 10:30 p.m. Monday night with the above statements. When we asked Paulson about it at 11:30 a.m. Tuesday, he responded: "No, that's not correct. We have already contacted the designer.

"It's a different design. We've already been cleared. We've gotten permission and we have a license," he continued, somewhat confusingly, before theorizing that a competing campaign was trying to discredit the Paulson campaign, and referring us to Doug Guetzloe, who "knows more about it."

With the election just a week away, Davila said a cease-and-desist seems moot. Based upon our next-day conversation with Neil Paulson, it's possible that they reached an accommodation with Davila in those 13 hours. Last night, Davila expressed what seems like a reasonable desire:

"My hope is to be compensated for the image and to hopefully let people know that just because an image appears on a Google search, it doesn’t mean that it’s fair game to be used without compensating or even acknowledging the original author."

We'll update this post if or when we hear back from Davila or Guetzloe.