Five things SeaWorld will probably announce during their Nov. 9 webcast 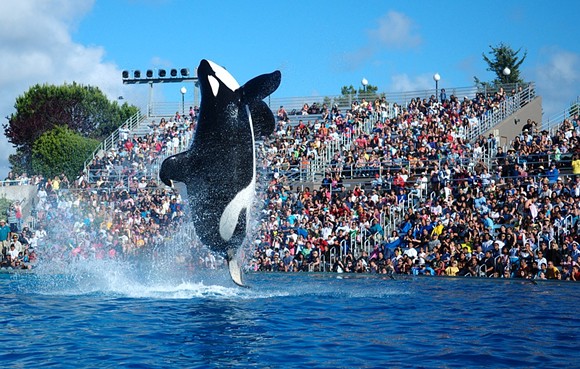 On Monday, Nov. 9, SeaWorld Entertainment is planning a webcast featuring SeaWorld CEO Joel Manby along with other senior management. The invitation-only webcast will include details of the third-quarter results (which will be released on Nov. 5 prior to the webcast), and it will give new details on a company-wide strategy going forward.

Rumors have been swirling for some time about what that new strategy would be. Manby most recently served as the president of Herschend Family Entertainment. Under his leadership there, he oversaw major expansions at Silver Dollar City, Dollywood and the Newport Aquarium, among other attractions.

SeaWorld has suffered a number of disappointing quarters recently with declining revenue and attendance at their parks, specifically the SeaWorld-branded ones. With the double whammy of Harry Potter expansion at Universal and the Blackfish documentary, the recently independent company has struggled to keep its market share within Orlando and San Diego, its two biggest markets.

SeaWorld was placed on the NYSE in early 2013 but has performed well below many analysts’ expectations. The August quarterly report, the most recent one, saw an 84 percent drop in net income compared to the year before. Attendance also dropped by 100,000 guests during the same quarter as compared to the previous year’s second quarter.

How Manby plans to move the Orlando-headquartered park and entertainment company forward has been the central focus for many investors. Here are the strongest rumors on what he may announce on Nov. 9:

With recent rulings against the company in California (a decision SEAS is now appealing) and declining attendance in Orlando – due in part to increased competition from Universal – one of the most likely focuses on the upcoming webcast will be international expansion plans.

The partnership between the two companies was focused on Asian expansion, a major market that both have expressed interest in moving into.

Other markets outside Asia are also possible, as SeaWorld Entertainment has announced plans in the past that included new parks in the Middle East.

Other possible rumored options within the Village Roadshow partnership include cross-promotion within each other’s parks. A less likely rumor involves Village Roadshow building film and television studios on the SeaWorld Orlando property. The large property is viewed as one of the company’s best assets. Some more extreme rumors have even pointed to SeaWorld selling off some or all of its Orlando property. Interested parties rumored to include local developers, NBC Universal and the Wanda Group from China.

Matt Rearden was recently moved to a newly created role within SeaWorld Entertainment, moving from “Corporate Vice President of Business Affairs” to the newly created “Senior Business Development Officer.” Rearden oversees numerous business aspects of the company, including international and domestic development and merger and acquisition opportunities. The need for new oversight of acquisition opportunities may point to a new focus within the company. Formerly the company has used mass-marketed attractions, including 4-D movies based around Goosebumps and a special Christmas overlay featuring The Polar Express. The company also owns the U.S. theme park rights to Sesame Street.

Universal owns the rights to Sesame Street in many overseas markets, including Singapore, where it features an Elmo-based dark ride.

The Village Roadshow partnership could more easily open the door for SeaWorld to gain access to a larger group of possible intellectual properties it may be interested in buying the rights to use within its parks. While Universal and Disney will keep most of the top-tier IPS off the table for SeaWorld, smaller franchises, including ones based on popular kids programming or books, remain a possibility.

Joel Manby is no stranger to unique acquisitions to diversify a company. While at Herschend, Manby moved the company beyond its traditional roots of theme parks by purchasing the Harlem Globetrotters, numerous aquariums and the Ride the Ducks tour company.

A more extreme option for Nov. 9 would be to completely refocus the company. That could mean many things, but the most likely options may include ending the long-controversial orca breeding program (an unlikely option since the company is currently pursuing legal options that would allow it to continue breeding in California). Other extreme options to help refocus the company might include taking it off the stock market and possibly shifting the corporate model to a not-for-profit structure.

The company is known for its conservation efforts, and some have pointed to the profit motive currently in place in the publicly traded company as sending mixed signals. A not-for-profit tax structure may also open the company up to new ways to structure its debt, its partnerships with conservation groups and other beneficial options.

A Focus on Rides

One of the more likely aspects of the webcast will be updates to non-animal aspects of the parks. SeaWorld Orlando is already building Mako, a hyper coaster that will be the park’s third major coaster. Busch Gardens Tampa is also currently building a new family coaster in the Egypt section of their park. Manby has a history of building up the ride count in the parks he’s overseen, a move that proved popular in the regional parks he mostly recently oversaw. A similar move could help keep the SeaWorld parks relevant with locals and thrill-seekers. But the move is criticized by some as a shift away from the central focus of the parks, a focus that helped separate the parks in the crowded Florida market. A more Six Flags-like SeaWorld may prove to be costly in the long run as well, due to upkeep cost for the large outdoor thrill rides.

SeaWorld Orlando opened a family ride last year, Antarctica: Empire of the Penguin. While the ride got a lot of media attention initially, it’s largely viewed as unpopular within the theme park community. Long lines, a confusing storyline and technical issues have plagued the ride since its opening. SeaWorld has even gone as far as including an option within its park app that allows guests to pay $5 to skip the line for the ride. With this cutting-edge trackless ride being such a flop, the company may be hesitant to invest in another expensive family ride.

While the SeaWorld parks have struggled, other parks within the company haven’t been hurt nearly as severely. Discovery Cove, Aquatica and Sesame Place all seem to be performing well and consistently rank as some of the top parks for guest satisfaction in the nation. Discovery Cove limits attendance, includes food and beverages with park admission, and has a resort-style ambience. That park model could be replicated in other markets, including Texas (where the third SeaWorld park exists).

Aquatica-branded water parks are now in all three SeaWorld area markets (Orlando, San Antonio and San Diego). In the Orlando market, one of Aquatica’s main competitors, Wet ‘n Wild (similarly unaffiliated with the Village Roadshow water parks), will close at the end of next year as its owner, Universal Orlando, prepares to open a massive new water park, Volcano Bay, in early 2017. How that new water park will affect Aquatica is still guesswork at best.