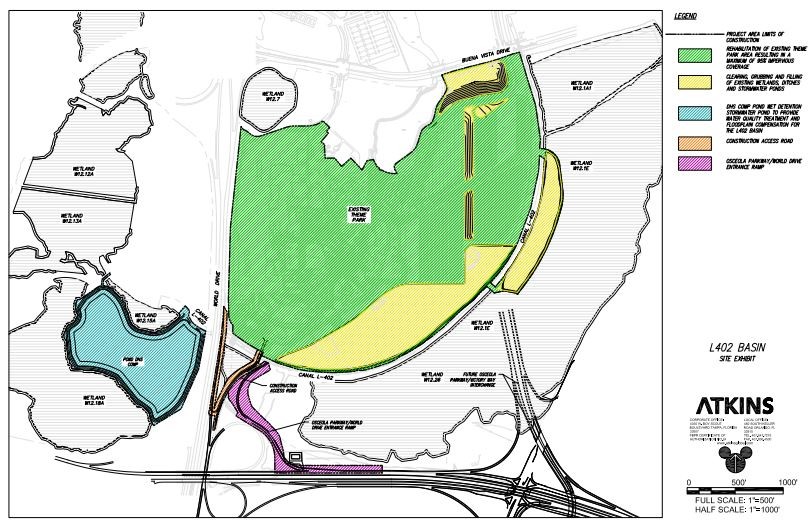 Disney announced in August that major updates were headed to Disney’s Hollywood Studios. Speculation has mostly involved rumors of a much needed new Victory Way entrance and where the park is going to expand. While chatter of the new entrance has been around for a number of years, Disney recently filed paperwork with the water management district to redo the entrance of the park.

The permits (# 48-00714-P) confirm three major rumors regarding the future of the park.

The documents also show a large new retention pond being built across World Drive in what is now a wooded wetlands area (just to the east of Blizzard Beach’s parking lot). That large new retention pond is linked to the current DHS property via a drainage canal. The need for such new large retention pond is a good sign of major new additions to the park in areas that are currently not as developed. The drainage from a new expanded parking lot, new entrance road and the additions of new lands, will all contribute to the runoff feeding the new pond.

The third major insight we gain from the new documents involves that old entrance rumor. While most expected the new Victory Way entrance to be located near Caribbean Beach, the documents show a new interchange at the entrance of the ESPN Wide World of Sports. Osceola Parkway would get a flyover (similar to the 436/50 one near the executive airport) with specific off-ramps that would lead into a new entrance for DHS. That large new entrance would cross through current wetlands allowing for easier access the both the park and the Wide World of Sports. This new entrance would also give even more developable land near where Star Wars and Toy Story are going in the park.

Both the new retention pond area and the new entrance plaza were hinted at in the Miralago wetlands documents Disney filed recently. Nearly the entire wetlands area in-between DHS and the Wide World of Sports was included in areas Disney wanted to rezone to allow for new development. Those documents, while showing where Disney wanted to build, didn’t give details on what they wanted to do. These new permits show the exact layout of the future road network and the drainage plan for the park.