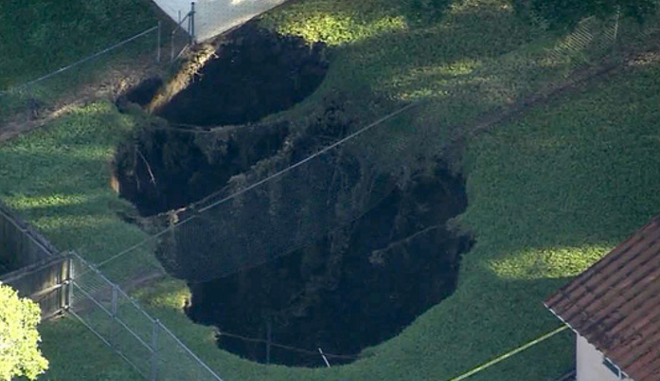 A massive sinkhole is on the verge of swallowing an entire duplex in Hillsborough County.

Code enforcement authorities claim the sinkhole, which is 30 feet wide, 30 feet deep and growing, has reached the edge of a two family residence and a neighboring detached garage. "Slowly but surely it keeps going and going and going," said neighbor Brittany Arias to USA Today, "It's progressively getting bigger and bigger and bigger."

As of Monday, Seffner residents have been forced to evacuate the duplex.  “We’re packing what clothes we have left or want to take — blankets, pillows, pictures — what we need and what we feel is most important,” said Jenifer Torres to WFLA. Torres lives in the side of the duplex closest to the sinkhole. “We don’t know if we’re going to be able to come back. And then, if we aren’t, what are we going to do?”

This duplex is only 2 miles from the site of the 2013 sinkhole that swallowed 37-year-old Jeff Bush while he slept in his bedroom. His body was never recovered.

For now, county officials have placed a temporary fence around the sinkhole.

Related: A brief history of sinkholes: 19 times a gateway to Hell opened in Florida