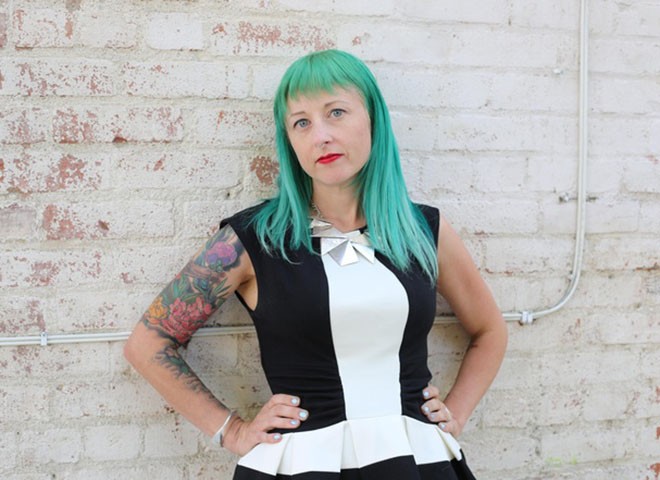 A Suicide Girl is many things, but an object to gawk at isn’t one of them. Uniquely beautiful, thousands of alternative-style women take tastefully sexy photos and post them to the safest of havens—the Suicide Girls website. But this isn’t just a sanctuary for posting pictures and garnering likes. Thoughtful discussion about anything from classic cars to U.K. politics is rampant throughout the community.

ORLANDO WEEKLY: What do you do on the day-to-day at Suicide Girls?

Missy Suicide: Oh, man. I run things. I take care of everything under the sun. There is really no one thing. Like today I had meetings with all the staff and figured out what are the goals for next week. And I had a meeting about a business partnership, and did two other interviews and found a publicist in Chile.

MS: I started Suicide Girls as a way to celebrate the girls that I thought were the most beautiful in the world—girls who chose not to fit into the norm and celebrated their individuality.

OW: Suicide Girls got started one week before 9/11 happened. How did the response go with the name?

MS: Well, it wasn’t an easy time, for sure. At first, like everybody we were just kind of stunned by the event and you didn’t really know what was going to happen. Slowly, but surely, things returned to normal and we were able to keep on going. It was tough for sure, but we made it through.

OW: Now you have thousands of Suicide Girls and hopefuls. How did you get all this interest in your business?

MS: We’ve had a lot of press and interest generated and we’ve a presence on every social network ever, that’s ever existed. We’re about to hit 100 million hearts on Periscope, we have 7 million on Facebook, 4 million on Instagram. We’ve just got a ton of interest that we’ve been able to generate.

OW: What sort of expectations are there of a Suicide Girl?

MS: The expectations are just that you participate in the community… there’s no rules and regulations. It’s not like being Miss America. The girls just are just themselves and hopefully they participate in the community and get to know people, and get to know other Suicide Girls. If you ask any Suicide Girl what her favorite part about being a Suicide Girl is, and she’s gonna say the friends that she’s met on the site. Girls have formed these really, really great relationships with one another—with girls around the world. Countless best friendships have been made.

OW: How do you get people who see this as neo-porn to see it your way?

MS: The female nude form is the most celebrated subject matter in all of art history. If you go to any museum in the world, or any art museum, you’re likely to see as much nudity as you would on Suicide Girls. The women are beautiful and proud and confident of their bodies and of themselves. They’re not afraid or embarrassed of showing their bodies, or feeling sexy.

OW: How does social media play into the Suicide Girls’ mission?

MS: Suicide Girls started as a social network before Myspace or Friendster or Facebook or Tumblr or Twitter or anything like that. So we’ve always had social networking component to the site. I feel like Suicide Girls is the coffee shop or the cool bar in the back alley that people can congregate in and have conversations about the things that interest them. And you can meet people that are interested in not only alternative beauty, but also interested in classic cars or UK politics or vegan cooking. The social networking aspect of Suicide Girls has been about giving the girls and the members a place not only to express themselves through their images, but also share their thoughts and feelings with the world.

OW: What made you want to bring the Blackheart Burlesque back after such a long hiatus?

MS: We put out a book called “Hard Girls, Soft Light” in 2013, I think, and we sent two girls on a book signing tour up and down the west coast. There were just signing the books, and there was a comic book store in Santa Cruz and there were 500 to 750 people standing outside this comic book shop waiting to get two girls’ autographs. We were like, “clearly people want a live performance, and we can do way better than just two girls in a comic shop.”

OW: Who makes the creative decisions for the burlesque show, and who choreographs it?

MS: The choreography is done by Manwe Sauls-Addison. The thing that I nerd out about the most is pairing the music with the themes. So we’ve got this ongoing list of like 250 themes. Like comic books, movies, TV shows, superheroes, video games—all the things that would appeal to our audience. So I’ll see one and go, “Oh! We definitely need a Sailor Moon number this time.” or “We definitely need an Adventure Time number and let’s put the Black Keys to it.”

OW: How do crowds react to these sorts of creative decisions that you make and the show in general?

MS: The crowds love it. They can identify on so many different levels. They really have a great a time.

OW: Is it a wide variety of people?

MS: Oh, yeah, totally a wide variety of people. The audience tends to be slightly higher female than male, interestingly enough. It depends on what city you’re in and what day, but for the most part it’s more women who come see the show than men. And lots of couples. It’s mainly younger people, but there are some older people. It shows that you can have fun no matter where you’re at in your life.

OW: What’s an average day look like for them when they have a show?

MS: Makeup on the bus in any city. They have two or three hours to go find breakfast, sort out laundry and whatnot—any personal errands they need to do. Then they have lunch, and go to the venues to have the run-through. They do costume prep and everything, then they have a meet and greet, the opening act, then the performance. They spend like an hour packing up, getting everything all settled, then they get back on the bus and drive to the next time to start it all over again.

OW: Why do you think people continue to gravitate to Suicide Girls?

MS: I feel like… the girls are beautiful. The message of confidence is the sexiest attribute a person can have still holds very true. There’s a lot of people that have found Suicide Girls as a place where they can be appreciated for themselves. We’ve had hundreds of couples that have met on the site and get married. Dozens of babies that have been born since their parents met on Suicide Girls. Countless business partnerships and friendships. Bands have been formed because the people met on Suicide Girls. Suicide Girls tends to be a really positive community. You can’t post a photo on Instagram of yourself with your grandmother without getting trolls leaving mean, horrible comments. Or, you know, post about your breakfast on Twitter without getting body shamed. On Suicide Girls, women post nude photos and the overwhelming response is all positive. There’s really no negativity. Everybody is respectful. You can have a debate in the politics group or the soccer group, and the members are always civil to one another. They might not always agree, but they’re civil.

The Blackheart Burlesque makes its way to Orlando this Friday at the Beacham. Tickets to see the Suicide Girls dance around in Stormtrooper helmets are available here.