The evolution of Metric, plus Orlando's the Pauses (House of Blues)

The last time I saw Canada’s Metric (Nov. 1, House of Blues) was almost exactly 10 years ago at intimate concert hotspot the Social. They were a big indie deal then. Now they’re a much bigger popular deal in general. Perhaps only Sweden’s the Sounds has been as effective, successful and enduring in directly translating the ‘80s vestiges of new wave and classic synth-pop into a viable 21st century dance-rock sound. And Metric has done it with indie edge, dance-floor glamor and a stadium wingspan.

The style already personified early on in fashionable frontwoman and band avatar Emily Haines has by now emanated outward and manifested in a much grander production of dazzling lights and costume changes.


There were some slightly odd lapses in taste for a band of their cred (cheesy intro and interludes), possibly suggesting some ongoing growing pains in their transition from indie to mainstream. But, no doubt, they brought the show.

Beyond the finer points of execution, however, Metric is a band that sprouted from the right soil and earned their fame legitimately. And for all their bigger profile, Emily Haines jumped off the stage during the encore and basically shook hands warmly with practically everyone in the front row. That’s dope. 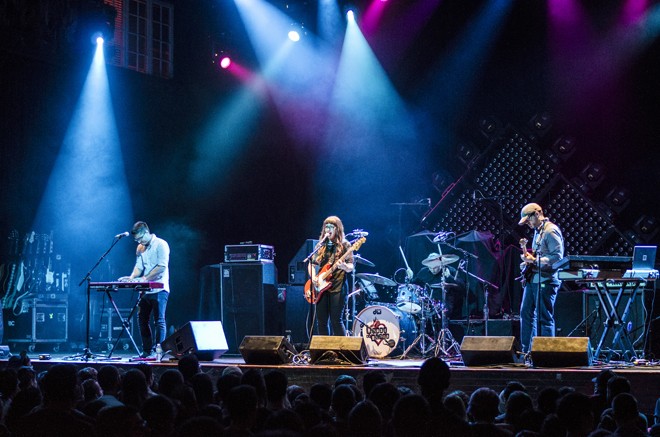 A nice local bonus for this particular show: Orlando’s own indie-rock crop the Pauses got on the bill.