Beyond Dippin' Dots: Artist Heidi Neilson talks about her "Menu for Mars" at UCF downtown Friday

Like a teeny-bopper who took Casey Kasem's famous edict to heart, Brooklyn artist Heidi Neilson keeps her feet on the ground but keeps reaching for the stars. Much – though not all – of her work envisions outer space from our vantage point here on Earth, collecting data and creating imaginary strategies for situations like stocking a kitchen on Mars, mapping space debris, and decoding Earth's weather patterns by intercepting transmissions from orbiting NOAA satellites using a quadrifilar helicoidal antenna (whew).

Friday at UCF's downtown Center for Emerging Media, Neilson will talk about how Menu for Mars evolved from a supper club that met monthly to discuss how the Mars environment would affect colonists' food supplies (as well as their physical, cultural and psychological needs) into a kitchen installation that synthesized those talks with related research to demonstrate real food solutions, which were documented and shared with NASA.

How will the conditions on Mars affect the menu? To augment government and private space programs, The Menu for Mars Supper Club researches and taste-tests a menu for dinner tables en route to, and on, the Red Planet.

The Menu for Mars Supper Club meets at a different restaurant in NYC on the first Thursday of each month. In an approach similar to Mars analog efforts, our mission is to eat and survey these restaurants; gathering recommendations, suggestions and opinions from restaurateurs about what food they would prepare on Mars. Each dinner we are joined by an expert who has insight into related fields, such as horticulture, space nutrition and culinary anthropology, for discussion on the wide-ranging implications of dining on Mars. The supper club’s collected and summarized dinner findings will be made available to NASA, the Chinese Space Program, the India Mars Mission, the Mars One endeavor, and other people engaged in planning Mars colonization.

After a year of research, the Menu for Mars Supper Club implemented its findings in an analog Mars kitchen installation at The Boiler-Pierogi in May and June of 2015 in Brooklyn. Visitors were invited to prototype meals using dried and thermostabilized ingredients in the test kitchen. Dishes will be documented, sampled, and and vacuum-packed.


And unlike Matt "The Martian" Damon, they got a lot more ambitious than potatoes for every meal – you may not actually get to taste the dried-milk yogurt or the macaroni and cheese with cricket powder at t his talk, but there will be pictures. 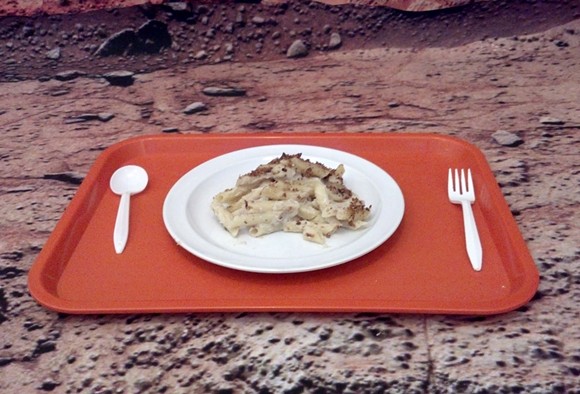 Some aspects of life on Mars Neilson and her collaborators considered: finding foods with a very long shelf life (five years optimally); figuring out how to cook food within a pressurized environment with potentially different gas mixture (no flame!); and considering how food might taste and feel different on Mars ("It will likely smell like peroxide and it will be hard to avoid dust in it.")

The final Menu For Mars Kitchen included a pantry of Mars-feasible ingredients and a greenhouse of edible weeds. "We’ve imagined that the Kitchen represents the first year (or more) on Mars. We think the first people will arrive to food that will have been sent there ahead of them — so our pantry is all dried, powdered, or thermo-stabilized foods. We included many familiar basics: lentils, chickpeas, other grains and dried spices. And some unusual ones: powdered cheeses, cricket flour, powdered plant protein, powdered butter," said the artists in an interview.

"The greenhouse featured edible weeds because they’re survivors. Unlike say, tomatoes, weeds can adapt quickly and can grow in harsh conditions or with very little water, so they would be a much better choice to take to Mars. We also had a cricket farm of about 1,000 crickets — which would be more realistic sources of protein than livestock."