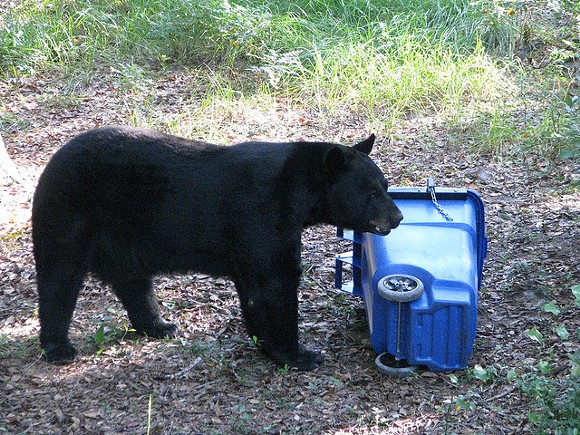 Seminole County commissioners may make bear-proof trashcans mandatory for businesses and residences west of I-4.

The mandate would require the county to purchase nearly 25,000 new trashcans, according to a report by News 6.

The initiative's strongest proponent is Commissioner Lee Constantine of District 3. He proposed that the cans would be paid for through a combination of grants, withdrawals from the Seminole County solid waste trust fund and a $1 monthly fee paid by each residence for a decade, according to News 6.

The report states that Commissioners Brenda Carey and Bob Dallari also support the mandate, which gives it the simple majority necessary to pass.

Seminole County residents currently have the option to purchase or lease a 65-gallon bear-proof trashcan at reduced cost as part of a voluntary program started last year.

Trashcans must meet several specifications before they're considered bear-proof: their lids must be tight enough to seal in any odors, hinges and latches must be strong enough to resist bear claws, and the container itself must be resistant to battering, chewing and tipping.

Reports of bears rummaging through garbage accounted for nearly one-third of 49,188 bear-sightings reported to the Florida Fish and Wildlife Commission from 1990 - 2014. Total bear sightings have increased fourfold in the last decade.

"Problems arise when bears have access to food sources such as pet foods, garbage, barbecue grills, bird seed or even livestock feed. Bears are adaptable and learn very quickly to associate people with food. Even though black bears are normally too shy to risk contact with humans, their powerful need to find food can overwhelm this fear," reported the FWC.

This initiative comes after Florida' first black bear hunt in 20 years, which was held to cull the bear population in Central Florida.