If you’ve been keeping up, you know about Central Florida breakout Flashlights. If not, you should look into these lovely fuzz-punks already. Even though I think their full potential has yet to be realized, they’re a local band that’s earned some national prominence on Hard Rock Records with last year’s Frightened Rabbits-produced album Bummer Summer and they’re exceptional.

Besides Flashlights, however, band principal Terry Caudill has proven to be a prolific enough writer to spill over into multiple side projects. Though they’ve gotten little attention so far, they reveal how surprisingly sustained of a wellspring for scruffy melodic perfection he is. I already gushed about Waxed when they made their live debut earlier this year at the Florida Music Festival. But another active Caudill venture is Cat Hair, a bedroom project that’s been recording and releasing for quite some time now, the latest being this summer’s LP Heaven.

Underneath all the fuzz and noise, Caudill’s always had a core of irrepressible pop aptitude, and Cat Hair showcases that melodic ability more plainly than any other project yet with even some electronic dimension. His recent Cat Hair performance (Nov. 9, Olde 64) was really only a vocal one with him basically doing his own karaoke (except when he actually did some Mariah Carey karaoke). But the material is good and deserves some investigation (Cat Hair's Bandcamp). 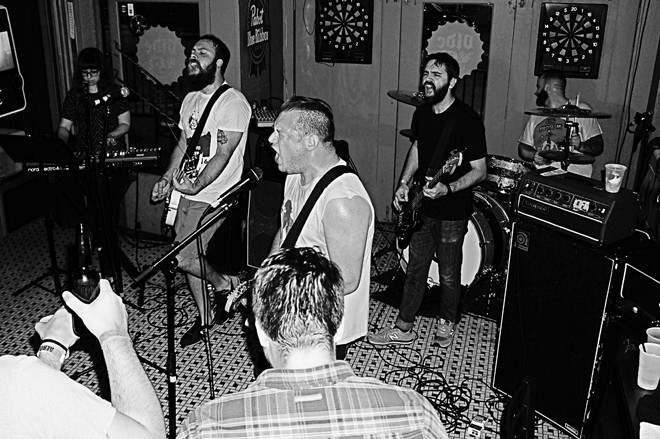 Although Orlando pop-punk dignitaries Teen Agers were part of the night’s bill, their segment was an entire bill in itself. In addition to their normal salvo of quality original songs, their super deluxe performance also packed in a Jawbreaker cover, a taste of Bad Accent (the part-German project involving them that debuted at the recent Foreign Dissent international showcase and a bonus Get Up Kids cover set that they recently worked up for the Fest with guest keyboardist Tierney Tough (The Pauses), culminating in a showing that was as fun and generous as it looks on paper.

No doubt some of it had to do with the birthday celebration of the guy who books the Monday show series at Olde 64 (Foundation Presents’ Marshal Rones) but this one was a scene. And that up-close live pulse was very nice to see in this space again. The shows are free so go see how the vibe stacks up to those legendary old Bar-BQ-Bar shows yourself. All events are listed on the Social’s website.