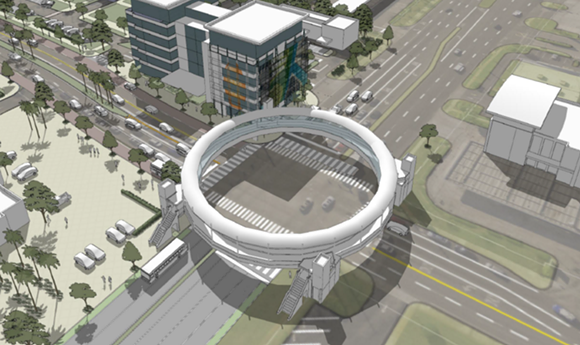 At the Orange County Board of Commissioners’ meeting earlier this month, the Orange County Planner Alberto Vargas presented the I-Drive Vision Plan. While the plan lays out the district vision for the next 25 years no specific projects are a part of it. The vision breaks down the district into 7 sub-districts, each with a different focus inspired by the developments within that sub-district.

Starting on the northern edge of the I-Drive District is the Entertainment Sub-district. The Entertainment Sub-District includes I-Drive 360, the entertainment McDonald’s, and the soon to open Mango’s Tropical Café. The district also includes the controversial Skyplex property. Orange County Mayor Teresa Jacobs ensured that every speaker at the BoC meeting knew that comments on the Vision Plan were for the overall recommendations of the vision plan and not for specific projects or for specific height concerns within the district.

The Vision Plan calls for a “gateway” to the corridor that could possibly include the long talked about elevated pedestrian bridge over the Sand Lake Road/I-Drive intersection.

Driving south down I-Drive, the next large sub-district would be the Retail & Hospitality District. The district includes Pointe Orlando, the new Del Frisco’s Steakhouse and popular places like Café Tu Tu Tango. The main focus in this area would be on improving the overall look of the area while also improving the transit within it. Pocket parks, bike lanes and bus dedicated lanes were all mentioned as possibilities for the sub-district.

Overall the entire district should see improvements such as undergrounding of utilities, new wayfinding signage and bike lanes. The plan was viewed by the county commissioners but individual proposals within the plan can be accepted or rejected as they roll out over the next 25 years. The next step for the steering committee is to formulate more specific standards for the district.