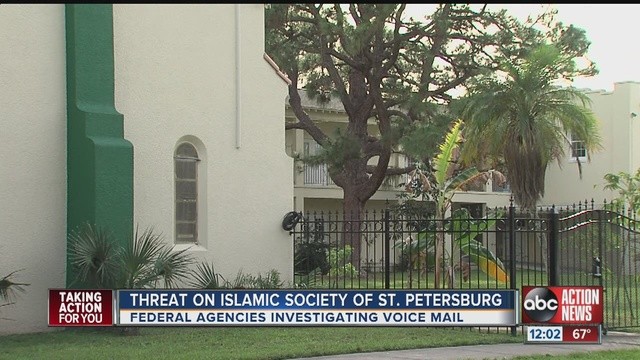 According to the Florida chapter of the Council on American Islamic Relations, some Florida mosques have reported receiving harassing and threatening phone calls after terrorists opened fire on crowds in Paris this weekend.

The organization says that the Islamic Center of St. Petersburg received a phone call early on Saturday morning, in which the caller stated: "We are tired of your [expletive] and I [expletive] personally have a militia that is going to come down to your Islamic Society of Pinellas County and firebomb you and shoot whoever is there in the head. I don't care if they are [expletive] 2 years old or 100."

CAIR says another mosque, which was not named, also received threatening phone calls, including one in which the caller threatened to "bomb your [expletive] location. The organization says that the U.S. Department of Justice is investigating the calls.

CAIR has issued a statement condemning the Paris terror attacks and thanking the DOJ for taking the threats to mosques seriously.

"We thank the U.S. Department of Justice for its prompt investigation of these terror threats and urge that hate crime charges be brought against the perpetrator when he is apprehended," said CAIR-Florida Chief Executive Director Hassan Shibly.

There have also been reports of vandalism and harassment at mosques in multiple states, and a mosque in Canada was set on fire, according to the Washington Post.

A Muslim family in Orange County has also reported that shots were fired at their house on Sunday morning, and they fear the act may have been a hate crime. That incident is being investigated.