Nazi symbols and fliers being distributed on UCF campus

November 17, 2015 at 2:34 PM
comment
According to a story in UCF's campus publication Knight News, campus police are investigating anti-Semitic stickers, fliers and literature that have recently been found on campus. A UCF newspaper box, which contained copies of the Central Florida Future, was one of the spots where the stickers turned up:

A student also reported finding a flier that read, "Florida, let's kick it off! Join your local nazis, the Atomwaffen division!” The Atomwaffen division, according to this online bulletin board, is some kind of Nazi-oriented fraternity that claims to have a small concentration of members in Central Florida. "We are very fanatical, ideological band of comrades who do both activism and militant training. Hand to hand combat, arms training, and various other forms of training. As for activism, we spread awareness in the real world through unconventional means. [keyboard warriorism is nothing to do with what we are.]," one of the self-proclaimed leaders of the group writes on the site. "We also do hunting, adventuring, and a group favorite is urban exploring."

One of the group's recruitment posters, below:

On Oct. 22, a Jewish family in Oviedo – which is not far at all from the UCF campus – was distraught to come home to find find that an Israeli flag they were flying outside their home had been defaced. Last week, one of our freelancers wrote today to tell us, a different home Oviedo was defaced with anti-Semitic graffiti. Photo below. 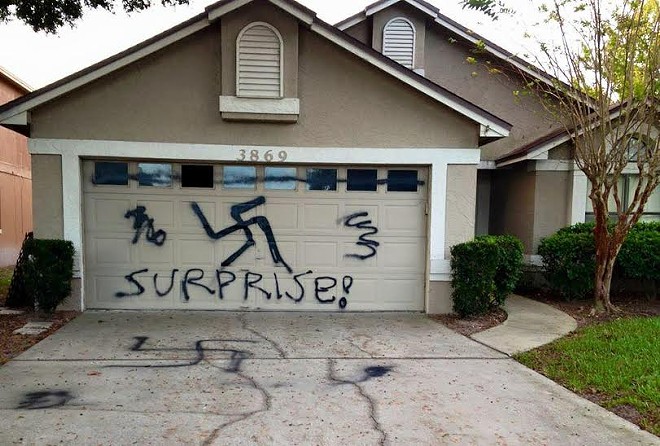