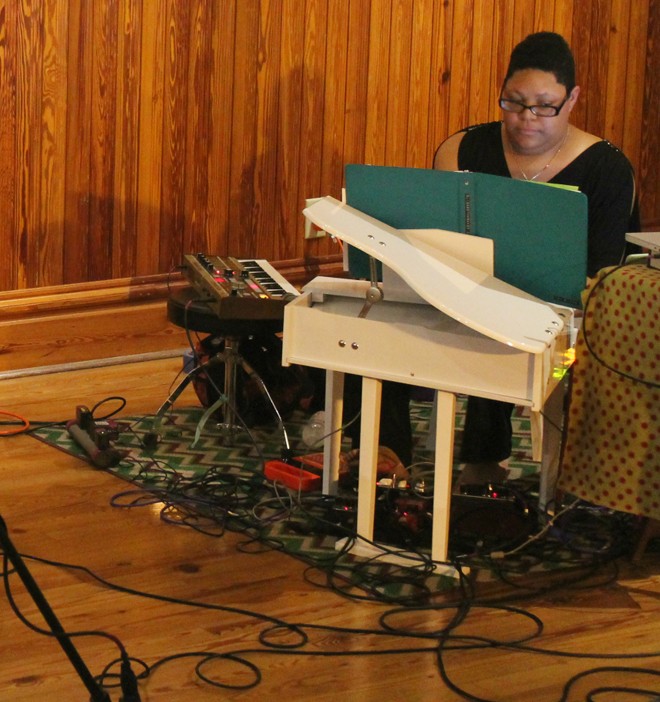 A “Toy Piano Project” sounds like something perhaps involving Fisher-Price and whimsical local circuit-bender Dr. Moonstien, particularly when I mention that a Speak & Spell was involved. Instead, this curious enterprise is the brainchild of Elizabeth A. Baker.

Baker is a credentialed pianist from St. Pete who’s a bright mind in the young wave of avant-garde classical music. She appeared at the In-Between Series as a player in Jim Ivy’s Tangled Bell Ensemble back in May but returned this time (Nov. 16, Gallery at Avalon Island) on her own toy piano crusade to kick off a national tour.

It could be that you’re not especially familiar with the toy piano as a serious concert instrument. I’ll go out on a limb and say that’s probably most of us. As one of the few specialists in the miniature device, Baker herself acknowledges its obscurity. But even if you are au courant in the toy piano, smart ass, it’s likely your conception will be notably widened after seeing her sonic and theoretical examination of it.

Baker opened with perhaps the most famous work written for the instrument, John Cage’s “Suite for Toy Piano.” Though she took appropriate liberty with the notes, it was sonically straight. It wasn’t until the next piece – one of her own originals tentatively titled “Meditation for Water, Wind and Metal” – that her genius really blossomed.

This most arresting passage of the evening employed deep reverb and delay effects to gather, synthesize and amplify sound to incredible atmospheric results. Reflected through her array, the ambient noise of the quiet room was escalated to a gripping otherworldly drone. Besides the featured toy piano, she punctuated the din as the working title suggests by engaging water with glockenspiel bars, cymbals and a colander. The technique was imaginative and the effect transporting, like some porthole to an alien sensory world.

Baker’s other original composition, “Experimental Suite for Toy Piano with Electronics and Drums,” introduced accompanist Leo Suarez. Though it has little to do with this performance, I want to note that he’s the drummer for savage new Tampa upcomer Meatwound because it’s a dope bit of trivia and I really think you should go get destroyed by them when they return to town to play Will’s Pub with Torche (Jan. 22). This appearance, however, showcased Suarez’s experimental free-jazz side with playing that was jarring, inventive and full of tension.

As distinguished as the other composers she interpreted in this performance are, Baker’s own pieces were by far the most provocative. Work like this is a sterling testimonial to her artistry that proves she’s not just an expert in the toy piano field but a pioneer.