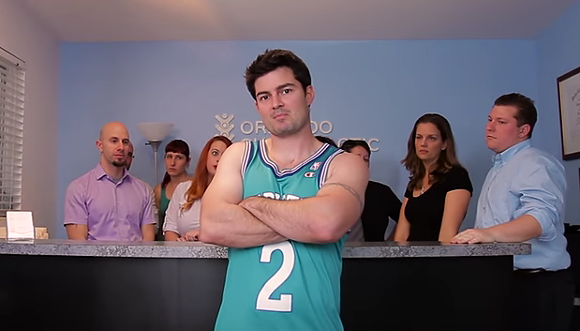 Joining the ranks of trill local businesses like 411-Pain and RimTyme, Orlando Chiropractic has entered the commercial hip-hop game with a new heater by rapper Lil Dicky.

Really, if you're going to enlist any rapper to rhyme about your business, there might not be a better choice than Lil Dicky, who points out in the song, "You know we got it crackin,' literally the homie got it crackin'."

The opportunity came about after Orlando Chiropractic's Darren Hollander contributed to Lil Dicky's Kickstarter back in 2013, resulting with the rapper recording arguably the most fire track in existence on the topic of chiropractic offices.

In case you're wondering why the rapper in this video looks more like Mark Duplass from The League than Lil Dicky, it's because the emcee role was played by Orlando-based actor Matt Einhorn. Sorry heads, but Lil Dicky only agreed to making the song.

The video was shot by Jeremy Maldonado and Brian Macaione of Walking Saloon Pictures.