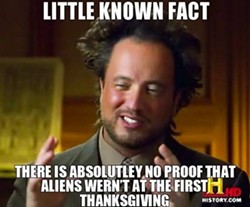 Get out the way, New England. Your cheaty Patriots may be 10-0 right now, but your crowing over being home of the first Thanksgiving simply cannot stand.

Standard Turkey Day history says that the first feast happened in 1621, as Plymouth Rock Pilgrims in Massachusetts shared their harvest with their Native American neighbors.

Not … so … fast, says Florida historian Michael Gannon. His research shows that colonists in St. Augustine celebrated a Thanksgiving feast with Native Americans more than half a century earlier than that, in 1565.

People outside Florida do tend to forget that the Spaniards landed in St. Augustine 450 years ago – making it the first permanent European settlement in North America. (In other words, shut the hell up, Plymouth Rock – and you too, Jamestown.) When Spanish Admiral Pedro Menendez's ships landed at what is now St. Augustine, they celebrated a Mass and then the European settlers and the native people shared a Thanksgiving meal.

"St. Augustine’s settlers celebrated the nation’s first Thanksgiving over a half century earlier, on September 8, 1565. Following a religious service, the Spaniards shared a communal meal with the local native tribe,” Gannon says.

The menu: “A stew of salted pork and garbanzo beans, accompanied with ship’s bread and red wine,” Gannon reports. (New Thanksgiving recipe inspiration? It sounds no worse than turkey and popcorn.)

We won't go into what happened to the Native American Timucua villages next. Pass the gravy!