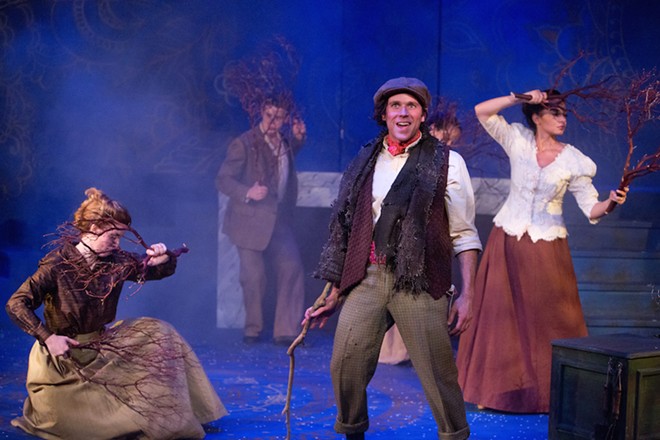 After several months of horticultural neglect, I spent Saturday morning attempting some agricultural first aid on my home’s overgrown flower beds. I carefully cut back a withered but once-bountiful rosemary bush, hunting for signs of life among the blackened branches, but by the time I’d trimmed it down to the stump there was barely a glimpse of green.

A similar lesson was on display the night before at the opening of Mad Cow Theatre’s The Secret Garden, the Tony-winning musical whose moral is that prudent pruning can make the withered bloom. Mad Cow cut away the lush Broadway trappings the show was built on in an admirable attempt at reshaping it into an intimate, abstract chamber piece; but in the process they inadvertently exposed the cold wooden core concealed beneath its foliage.

Like the 1911 Frances Hodgson Burnett novel upon which it is based, The Secret Garden follows young Mary Lennox (Kennedy Joy Foristall) from British-occupied India, where she is orphaned by a cholera outbreak, to Misselthwaite Manor on the Yorkshire moors. Mary’s hunchback uncle, Archibald Craven (Zach Nadolski), is too busy mourning his late wife to be a good guardian to the traumatized girl, who instead befriends the lively housekeeper, Martha (Sara Catherine Barnes), her brother Dickon (Cole NeSmith), and Ben (Glenn Gover), the grumpy gardener. With their encouragement, Mary hunts for the hidden entrance to the manor’s walled garden, kept locked since a tragic accident, in hopes of unlocking the secrets that haunt her family.

When I saw Secret Garden’s original Broadway production in the early 1990s, I recall being impressed by the pop-up-book sets; Marsha Norman’s literate, subtext-laden lyrics; and some of Lucy Simon's lullaby-like melodies, which sound like her sister Carly’s soft pop spliced with Sesame Street. For Mad Cow’s more modest Harriett Theatre, director Aradhana Tiwari (with the aid of choreographer Holly Harris) has dispensed with most of scenic trappings, instead employing an army of supporting actors swirling in Viewpoints-style patterns across Rebecca Pancoast’s pared-down stage as a substitute for set changes. Flickering candlelight, murky atmospheric haze, and hypnotic repetitive movement combine to create a seductively dreamlike tone that sustains interest through the opening scenes, and Foristall’s precocious performance makes you care for Mary, despite her being one of the most obnoxiously obstinate heroines in children’s literature.

But as the first act dragged on, I found myself increasingly frustrated by the unsympathetic characters, who spend more time soliloquizing to the audience than talking to each other or advancing the plot; if it weren’t for Barnes’ and NeSmith’s lively turns as the embodiments of folk wisdom, there’d be little to no lightness among the overwrought Gothic gloom. And though musical director Philip King has done a fine job coaching the unamplified chorus, a single keyboardist isn’t enough orchestra for this dense score, leaving the performance sounding like a rehearsal.

Whatever merits the first half of Secret Garden holds melt away in the second, which wastes the reveal of the titular MacGuffin in a rage-inducing anticlimax. The supply of fresh songs runs dry, leaving endless reprises originally intended to cover scenic transitions, while Act 2’s most memorable melody (“Come to My Garden”) is fatally marred by a miscast moppet with pitch issues.

The climax, which should be heartwarming and magical, feels as tidy and toothless as a Scooby-Doo solution; even an actor as strong as Steven Lane can’t make Archibald’s brother Neville into a threatening antagonist, and the action is stuffy and restrained when it should soar. I heard some sniffles behind me during the finale, so maybe I’m simply as prickly as a cactus, but despite some innovative directorial choices I can’t give this Garden a green thumbs-up.