Monthly concert series Punk on the Patio debuts Jan. 6 with Flashlights, Out Go the Lights and Slumberjack 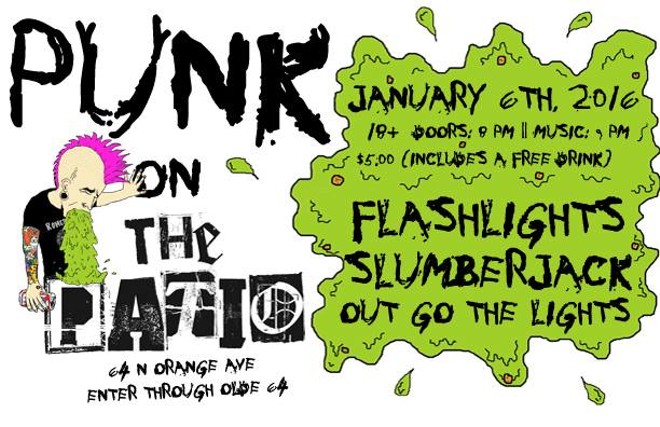 Although indie booking giant Foundation Presents has as defining a reputation as it gets in this city’s music scene, it’s not on the local front. But Marshal Rones, one of the group’s newer and most enterprising staff members, has been changing that. Now we already told you about the free Monday show series he initiated at Olde 64 this summer. In the new year, however, he’ll up the local scene events happening at the Foundation headquarters compound (which includes the Beacham, the Social, Olde 64, the Patio and Aero) yet another click.

Beginning Jan. 6, he’ll launch Punk on the Patio, a monthly concert series featuring a very attractive combination of setting, value and schedule. Like the name suggests, the shows will happen at the Patio, the great exterior urban space that was Eye Spy. Contrary to the name, however, the music won’t just be limited to punk. The debut, for example, features the indie-pop effervescence of Out Go the Lights and the technical breezes of Slumberjack alongside the fuzz-punk brilliance of Flashlights.

Cover will be five dollars, which is standard. But that includes a free drink (any domestic or well), which is generous, and delicious. And with a tidy and relatively early show time – doors at 8:00, music at 9:00, over by midnight – Punk on the Patio should be very doable for music heads who also have responsibilities. No school-night excuses needed.

Now, local scenesters have new reason to keep an eye on the Social’s calendar because there hasn’t been this much street-level stirrings from this usually national-minded group since the administration of about six years ago that brought cool events there like Garage Days.