Let's start with some full disclosure: I'm a huge Hall & Oates fan, so this review will be notably lacking in objective critical distance. That said, who really cares what critics have to say about Hall & Oates in 2015?

This is a duo that can claim a) massive influence, b) artistic and stylistic integrity, c) record-setting runs at the top of the charts, and, d) the ability to get a capacity crowd of 2700-plus (mostly white, mostly well-off) people to lose their fucking minds for 90 minutes. What does it matter if they did or didn't meet some critic's expectations?

But, you know, for the record: The show was totally awesome.

The 15-song setlist was an incredible display of Hall & Oates' hitmaking prowess, only veering away from their biggest pop hits twice: once for Abandoned Luncheonette deep cut "Las Vegas Turnaround" and again for "Do What You Want, Be What You Are" from 1976's Bigger Than the Both of Us. Heck, even their cover of "Jingle Bell Rock" that they closed the show with managed to be a minor MTV hit back in the winter of 1983. (One interesting note: Even though most of the setlist focused on the band's huge singles, Daryl Hall kept calling out tracks as being from various albums, a none-too-subtle reminder that this is a group that's got much more to them than just their hits.)

It would be easy enough for the band to have robotically plowed through this greatest hits set, but instead Hall & Oates breathed new life into these familiar classics with several new arrangements – most of which were slower, emphasiszing the groove and R&B undertones that have always been fundamental to H&O's sound – and several moments of vampy interludes (such as on "I Can't Go For That") that gave various band members moments to shine. The shiniest band member, it must be said, was definitely Orlando native Charles DeChant, a.k.a. "Mr. Casual," who's been a member of the Hall and Oates band since 1976. Best known as a saxophonist (it's his iconic playing you hear on "Maneater"), Mr. Casual also provided percussion backup, synth harmonies, and a good bit of personal flair, thanks to his sequined jacket and irrepresible stage presence. 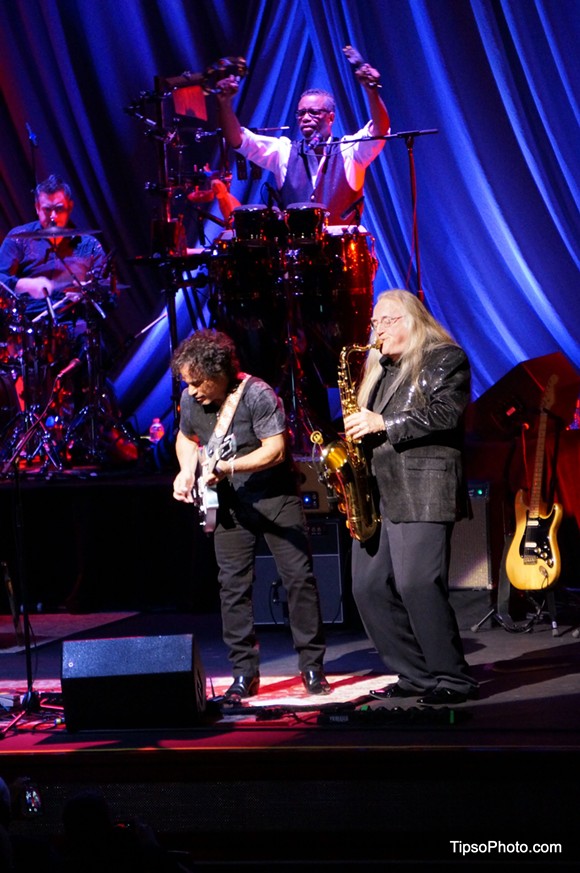 The audience responded in kind to Mr. Casual (and of course, Hall and Oates) by being in a constant, happily buzzed state of "OMG I LVVV THIS SONGGGG" throughout the entire night. From the white-haired over-enthusiastic air-drummer seated next to me to the lady a few rows up who very nearly exploded from joy when the band started into "She's Gone" to the folks who brought cardboard signs festooned with Christmas lights, the audience was one of the most engaged and ecstatic I've seen in a while. Sure, maybe the double-pours of Chardonnay the bartenders kept suggesting may have had something to do with it, but with a tight and polished band on stage delivering a string of near-perfect hits, it doesn't take too much wine to ensure a great time.


Setlist:
Maneater
Out of Touch
Did It In A Minute
Say It Isn't So
You've Lost That Loving Feeling
Las Vegas Turnaround
She's Gone
Sara Smile
Do what you want be what you are
I Can't Go For That (No Can Do)