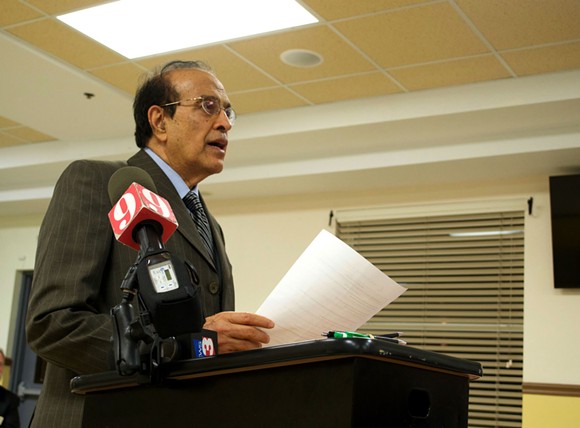 Fatima Ait Rami lives more than 2,457 miles away from San Bernardino, California, where last week 14 people were killed by a couple alleged to have been inspired by the terrorist group ISIS. But the Tuesday after the massacre, she felt afraid to wear her hijab outside in Orlando.

“I was very worried to get out of my house in the morning,” she says. “My daughter, who also covers her head by her own choosing, was worried about going to college. But we have to go out and move on with our lives. We cannot hide. We didn’t do anything wrong.”

She didn’t see anything out of the ordinary that day, but remembers the phone call the Islamic Center of Orlando on Ruby Lake Road received the day after terrorist attacks killed at least 130 people in Paris.

“We got a voicemail from a man saying he would come to take his revenge,” she says. “That’s why we’re trying to reach out more and show people there’s nothing to fear from us. We want to live happily and peacefully as a community with everyone else.”

Ait Rami and Dr. Mohammad Akhtar, president of Muslim Council of America, helped organize a panel Friday to speak to Muslims and non-Muslims about perceptions of Islam and terrorism.

“Islam means peace,” Akhtar told about 100 people who came to the panel. “Islam allows no killing no matter what...Why do we make a problem with some Muslims a problem with Islam?”

U.S. Rep. Alan Grayson, Orange County Sheriff Jerry Demings and other faith leaders were also in attendance. Demings says people should get to know their neighbors and report any suspicious activity to law enforcement. Grayson says ISIS and other terrorist organizations are trying to create a sense of terror that divides people and vilifies the Muslim community.

“Why are we allowing anti-Muslims to dictate the narrative of Muslim Americans?” Grayson asks. “The [Republican presidential candidate] race looks like a reality show, but instead of ‘The Biggest Loser,’ we’re on ‘The Biggest Bigot.’ President Obama never descends to inciting fear or hatred.”

Ismat Shah, who was in attendance Friday, says she’s been living in the United States for almost 50 years, and this country has become her home.