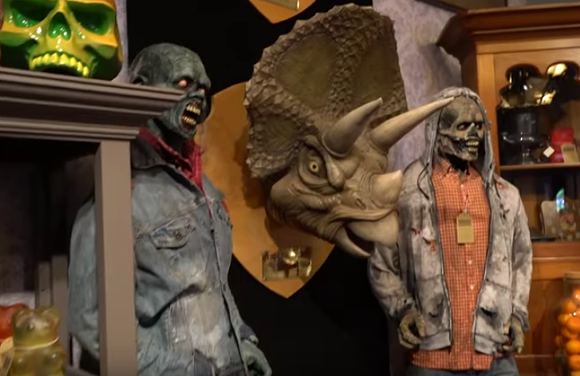 Local theme park memorabilia company Theme Park Connection recently closed its Fun Spot location. The popular memorabilia shop has proven that there is a dedicated base of theme park fans who are interested in memorabilia from the parks.

Over at Universal, a number of cult favorite attractions have closed recently. To help celebrate the memory of these attractions while tapping into this base that’s looking to take home part of the memories from the parks over the years, Universal has opened a new shop selling actual memorabilia from attractions throughout Universal Orlando.

The new shop replaces the former magic shop that was managed by the third party group. The former Theatre Magic’s Williams of Hollywood Magic Shop is now the Williams of Hollywood Prop Shop. The exterior of the shop remains untouched including the Williams of Hollywood sign, but the inside has been transformed into a unique collectibles shop reminiscent of the antique shops found around town. Gone are the theater rooms where magic tricks were performed, all the curtains and other room dividers have been removed giving the space a large but welcoming feel. The wood staircase in the main room still remains as does the impressive foyer. The walls are filled with memorabilia that’s not for sale, including the ‘Welcome to Wakita’ sign and busts from some of the Jurassic Park dinos.


The shop has a large supply of Twister attraction items, including some of the cows used in the show. At least two life-sized plastic cows have already been sold. Other items in the shop include license plates, movie posters and various items from the Twister pre-show. The shop recently opened so, unfortunately, the items from attractions closed further back are sparse. While some of the items confirm where they were located the majority of items in the shop look to be former merchandise props with tags only confirming they are authentic Universal Orlando props.

Along with attraction merchandise, the shop does sell some authentic props from movies and television shows as well. Some have speculated about the authenticity of some of the props at Theme Park Connection, but each of the items in the new Universal prop shop does come with those tags confirming the item is from the resort.

Disney does sell a number of items from its resorts as well, but those items are typically only sold to cast members or via special auctions that can raise the prices to astronomical levels, including a recent auction where a PeopleMover car sold for $471,500.