With this paper’s silver anniversary in effect, warm nostalgia is the theme around here this week. And it’s a big enough deal, apparently, that the cosmos is playing along, bringing Latin-alternative band Aterciopelados back to town (Dec. 10, The Social). Seriously, the timing is supernatural. I just dropped their name this week in my homage essay on former music editor Jason Ferguson. The Colombian band doesn’t come here often, he was the one who introduced me to their music, and my first and only time seeing them was in his company and his employ as OW’s new music columnist back in 2006 at a Latin nightclub just off I-Drive. Fate pays attention, guys. Watch your ass.

That previous experience at Club Hush was a late show – running on dance club time, not concert time – so we ended up pre-gaming at the Flipper’s Pizzeria that used to be in the same plaza. We were a couple sheets to the wind by the time doors opened but, once Aterciopelados began, I snapped back to attention. Although I walked in completely uninitiated, I was immediately struck by their art-freak energy.

Seeing them now in a pro concert venue that I’m very familiar with, one where I can truly measure their relative place in the music galaxy, it’s plain to see how powerful and wide their pull continues to be. The turnout was strong and the fever even stronger with lots of cheering and sing-alongs. Cat outfits never hurt either.


In a proper live facility, their performance was even better, showing fully how well they manage to synthesize the edge of progressiveness and the soul of tradition in ways that aren’t forced or Frankenstein. 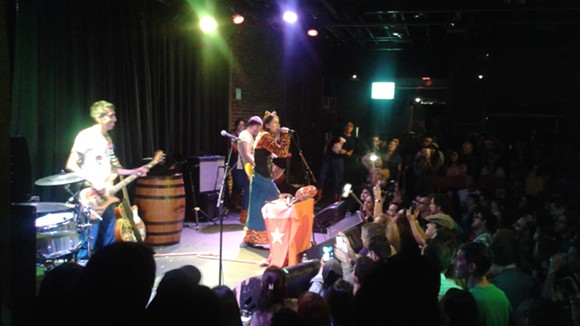 And because the zeitgeist right now is skewed so hard with all the xenophobic and, ironically, un-American rhetoric swirling about, I’m noting exactly how nice it was to be back in firsthand touch with a human experience like this. Hardly any English was spoken onstage at this concert and I didn’t understand a word, but I felt all the soul. Fuck that other noise.