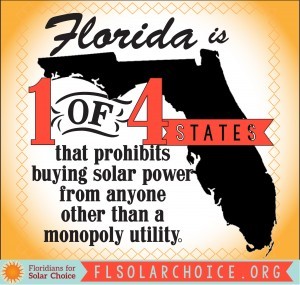 Today, in a press release posted to its website, Floridians for Solar Choice announced that it may have to postpone its effort to get a solar-energy initiative on the ballot for 2016. The problem, according to the organization, is that it may not have enough time to gather the signatures it needs by the Feb. 1 deadline. Floridians for Solar Choice needs 683,149 signatures to get on the ballot, but only 272,000 have been verified as valid so far by the state. There are another 212,000 signatures that have been gathered by PCI Consultants, a California-based signature-gathering company, but PCI has refused to release them to Floridians for Solar Choice until a dispute over billing has been resolved. You can read more about that dispute at Florida Politics, but the organization says in its announcement today that it hopes to eventually get its hands on those signatures:

"We are actively working to resolve issues for these petitions to be released for verification," its statement says. "Every signature collected to date has been paid in full and the coalition continues to collect signatures every day."

Petition signatures have been a hot topic for the two groups attempting to get a solar-power initiative on the ballot.

After Floridians for Solar Choice launched its effort, which would allow companies with solar capability to sell a small amount of energy to adjacent properties thus helping spur more interest in solar in Florida, a utility-backed initiative called Consumers for Smart Solar popped up and started gathering signatures for a competing ballot initiative that seems to do very little except confuse voters. The Smart Solar measure, called "Right of Electricity Consumers Regarding Solar Energy Choice," includes language in the constitution making it a constitutional right of consumers to use solar power – something consumers already have a right to do. It also went on the warpath, creating videos and media materials undermining the message that Floridians for Solar Choice was spreading with suggestions that the pro-solar initiative could create chaos, higher utility rates and more for consumers who don't choose solar.

Here in Orlando, some signature gatherers wearing T-shirts and holding signs for Floridians for Solar Choice were asking people to sign the petition being put forth by Consumers for Smart Solar. Other petition gatherers, including ones encountered by this writer, carried both petitions, but encouraged people to sign the Smart Solar petition, which was earning them more per-signature money than the Solar Choice petition. (Read this story from the Miami Herald about the aggressive signature-gathering initiative here.)

Here's a photo I took at Lake Eola Park during Orlando's Come Out With Pride event, showing signature gatherers with signs and shirts representing both Floridians for Solar Choice and Consumers for Smart Solar. The signature gatherers were offering people the Smart Solar petition to sign, although they were also carrying the one for Floridians for Solar Choice. When I told them that the two organizations were opponents and asked which organization they actually represented, they refused to tell me. And one of the canvassers became belligerent and argumentative and accused me of trying to prevent him from making money. 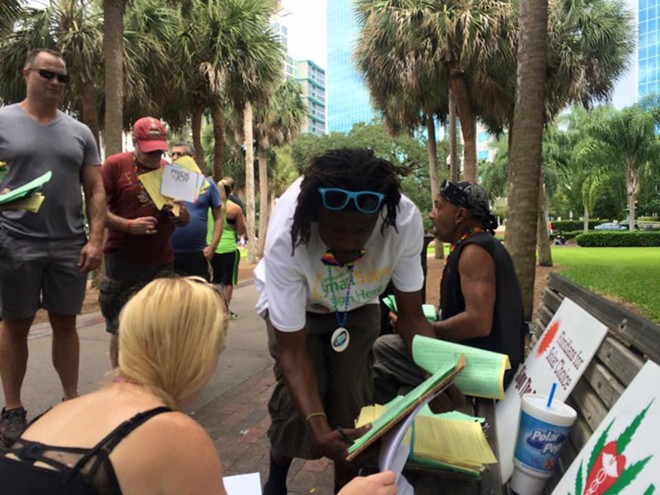 Signature gatherers are generally independent contractors, paid per petition, so they can work for a variety of initiatives. However, according to the Herald's story, they're not supposed to carry petitions for conflicting petitions. Supposedly, the organization and Consumers for Smart Solar told the publication, they wouldn't accept signatures from anyone known to be carrying both.

However, shortly after activists started warning people not to sign the "green petition" – the Consumers for Smart Solar petition being circulated in Orlando was being printed on green paper for months – IDEAS for Us posted a blog warning people that suddenly the Consumers for Smart Solar petition was being printed on white paper. On Nov. 16, the organization told people that the only way to know for sure that they were signing the actual pro-solar petition was to look for the ballot title: “Limits or Prevents Barriers to Local Solar Electricity Supply” or to go directly to the Floridians for Solar Choice website and download a petition there.

To date, Consumers for Smart Solar has gathered 412,000 signatures for its petition.

In the meantime, Floridians for Solar Choice says it is "now exploring options for a 2018 campaign. All petitions gathered in Florida are valid for a full 24 months from the date of signing, which means all petitions to date are valid for both the 2016 and the 2018 election cycle."