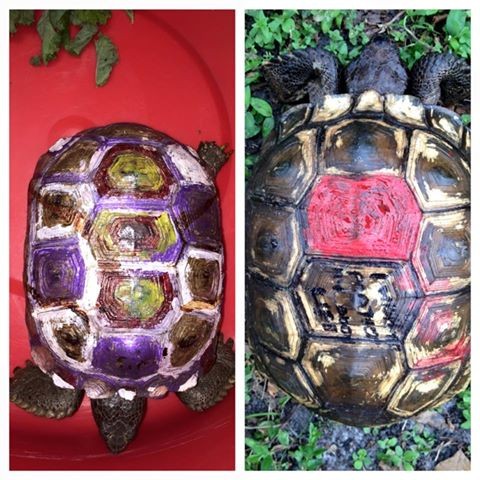 Two federally protected and threatened gopher tortoises were founded covered in paint this week in the East Orlando area.

Officials from the Back to Nature Refuge & Education Center are saying on Wednesday, Dec. 16, two different incidents occurred involving someone painting gopher tortoises, one from Blanchard Park and the other from Pine Hills.

The two tortoises were brought in for cleaning and rehabilitation. However, the larger tortoise from Blanchard Park passed away Thursday. From the center's Facebook page:

It was suspected to have been in someone's ownership for several weeks to months without proper nourishment. Our vet examination (Dr. Vizzcarondo of Broadway Animal Hospital) concluded that he was full of intestinal parasites and severely dehydrated. The markings appear to have been done by a young person, perhaps teenager or young adult, based on the writing found on him. Iron/B12/fluids and removal of the (later identified as permanent marker) markings was successful, but unfortunately, too late as his body was already beyond the ability of recovery. The parasitic infestation likely lead to the rapid decline of the tortoise's health. We were not given enough time with him to safely begin the deworming treatment. We are thankful to both citizens who rescued these tortoises and will keep you updated on the other (smaller) tortoise as time progresses.

Gopher tortoises are a threatened and protected species, meaning it's illegal to "vandalize" or harm them in any way. Like many threatened species, gopher tortoises seems to be plagued by the stupidity of uninformed people in Florida. Just months after a woman claimed that "saving turtles is a hobby" before throwing a land dwelling gopher tortoise in a pond.

Let's go over this one more time, gopher tortoises will die if you paint their shells and they don't swim.