Three years ago, Briana Daniel was a recent college grad. She had moved downtown and she couldn't help but notice the surprising number of homeless people living in and around the city’s center. She wanted to do something to help these people who were sleeping in doorways and parks, but she wasn’t sure what it was she could do – so she tried “going homeless” herself to see what it was like to live on the street.

For two weeks she slept outside, talked to homeless people about what their lives were like and learned what they needed most. She came away from the experience realizing that one simple thing most homeless people she met craved was dignity – and it’s hard to feel like you have dignity when you have nowhere to wash and no way to clean your clothes.

So she figured that one simple thing she could do to help people is do their laundry. She started a free laundry service exclusively for the homeless and encouraged people to sign up. Twice a week she started laundry by appointment at the Thornton Park Coin Laundry. The service proved to be extremely popular. These days she and the organization she founded to support the effort, called the Street Team Movement, do laundry for approximately 200 people per week.

Her organization also hands out toiletries and clothing and offers counseling and mental-health referrals for people who need them. 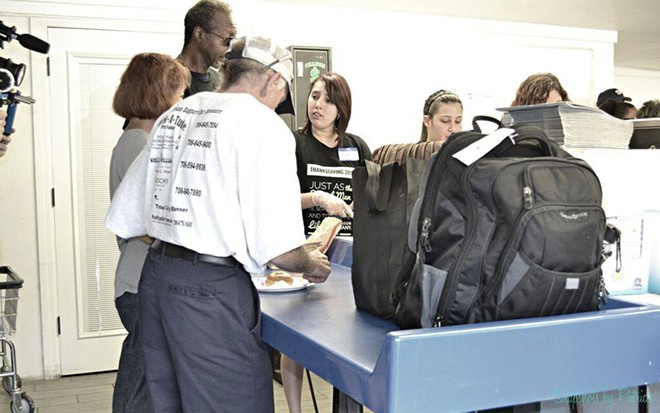 Now, Daniel says, she wants to take her efforts a step further. Inspired by a project that started in San Francisco by an organization called Lava Mae, which retrofits buses with showers and toilets that travel around the city to give the homeless access to bathrooms, she wants to bring a mobile shower unit to Orlando.

“It’s a 20-foot-long trailer, and it has bathrooms with a shower and a sink and a mirror,” she says. “You can go in for about 20 minutes, and you can shave, shower, whatever you need to do in there. Get ready for work, clean up. The ones we’re looking at have also have two washers and dryers in the back, to keep the linens we’ll be using clean.”

Her vision, she says, is that the bus would park in various locations around the city for five hours at a stretch, three times a week to start. Eventually, Daniel says, she’d love to see the unit travel to other cities in the region, as well. The Street Team Movement, she says, has partnered with another Orlando nonprofit, Clean the World, for this effort. Her goal is to bring a portable shower unit to Orlando to offer a public demonstration so people can see how the units work and show them that it won’t be a public eyesore.

“I figured that the best way to get the community on board with something like this is to bring the trailer out and say, ‘this is that it is, this is what it does,’” she says, because she unfortunately has received some pushback about the idea. “The reason some people are concerned, I guess, is that it’s a new concept. … We met a bit of rebuttal from some members of the community, most of which live in Thornton Park, because it’s a smaller community and they are afraid they’ll be overrun with homeless people. We will take measures to make sure that’s not the case.”

Daniel says it'll cost the Street Team Movement about $50,000 to purchase one of the units – but she's already got some ideas for how she might be able to raise the money.

"We are partnering with some bigger corporate sponsors, who would have an interest in wrapping the bus with their business name," she says. "As well, we have got donations from the community. … This ting only costs about $50,000 to get one of these and put it out there. For some of the things we're spending money on in this community, $50,000 is like a drop in the bucket."