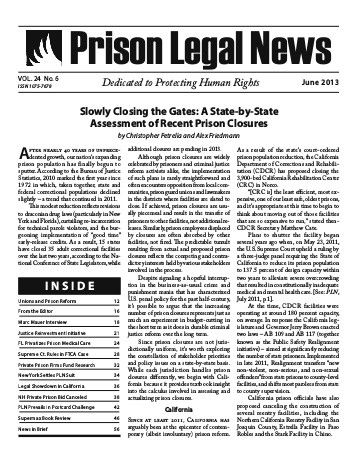 Today, according to the News Service of Florida, the state Department of Corrections issued an objection to an attempt by the Florida Press Association, the First Amendment Foundation, the Reporters Committee for Freedom of the press, the Society for Professional Journalists and the American Society of News Editors to file "friend of the court" briefs on behalf of a publication that, for the past 25 years, has given inmates prison-centric news and views on everything from prison food-service contractors that serve maggoty meat to sexual assaults in prisons to excessive telephone rates charged for prisoner calls.

The publication, called Prison Legal News, is a project of the Human Rights Defense Center, a nonprofit organization that advocates on behalf of people locked up in U.S. jails and prisons. The monthly publication, which has successfully fought legal battles in a number of states that have tried to deny prisoners access to its content, has been struggling with Florida's attempts to keep the magazine out of circulation in state lockups since 2003, when for-profit prison corporation the Geo Corp. decided that the publication's pen pal advertisements, prisoner-created artwork and other features posed a security threat. Prison Legal News took the Geo Corp. to court and by 2005 subscriptions resumed after the state Department of Corrections assured the court that it would not ban publications based solely on the content of advertising. But in 2009, the state Department of Corrections stopped delivery again, this time claiming, among other things, that the pen pal advertisements could help facilitate scams run by inmates.

Prison Legal News filed suit again in 2011, charging that the state is violating the First Amendment by prohibiting the distribution of its magazine in Florida prisons. In October, a U.S. Circuit Court judge ruled that the DOC could ban the publication if it felt its advertisements posted a security threat, but stated that the agency had violated Prison Legal News' due-process rights by failing to notify the publisher each time an issue was withheld. Prison Legal News has appealed the ruling (the DOC, meanwhile, has appealed the court's ruling on the due-process violation), and the the media organizations are trying to let the court know that they are concerned that this situation could set a disturbing precedent – what's to stop the DOC from banning, say, the Miami Herald or the Gainesville Sun, because the DOC claims it objects to advertisements? What's to stop other state agencies from doing likewise?

"If [the] state can prohibit distribution of Prison Legal News in Florida prisons simply because it carries advertising for products of services prisoners cannot acquire or use, the state also could prohibit distribution of most publications," the brief points out. "Even worse, if the Court were to interpret the First Amendment as allowing the challenged rule to survive, local governments that prohibit the sale of certain products and services also could ban newspapers and magazines that carry advertisements for those products and services."