There were moments in my culinary forays this year that really stood out, so much so that I felt compelled to play Oprah for a day and share (or re-share, as the case may be) five of the most memorable.

Early in the year, Jessica Bryce Young and I had the distinct pleasure of sampling Matsusaka beef from Matsusaka, Mie Prefecture, in Japan. It is, arguably, the finest

beef you'll ever have the pleasure of ingesting. Sublime doesn't come close to describing how good that beef was, and there's hope that local restaurants/hotels/retailers/wholesalers will make the beef available in the Orlando area sometime next year. And if they do, it won't be cheap ($250-$300 per pound retail).

We celebrated my wife's birthday at Norman's and were treated to a multi-course meal so grande, "grande" doesn't begin to describe it. Executive chef Andres

Mendoza and executive pastry chef Jose Detres presented us with 11 expertly crafted dishes that we'll remember for a very long time. At one point during our third dessert course—that's right, our third dessert course—foie gras was shaved onto our caremelito parfait. That should give you an idea as to the level of decadence we experienced. It should be noted that general manager and sommelier Yusuf Yildiz is a master host and curator.

point during a media preview of his Disney Springs restaurant, Morimoto methodically, and impressively, hacked and sliced a giant tuna in mere minutes, then proceeded to fashion a 60-foot-long tuna roll (along with the help of many attendees), much to the delight of the gathered throngs. While the sushi roll wasn't very memorable, Morimoto's performance certainly was. 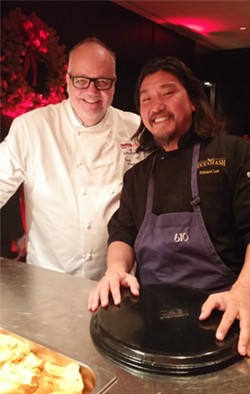 The Dec. 5 stop of the James Beard Foundation's Celebrity Chef Tour at the Four Seasons Resort Orlando was easily the highlight of the 2015 culinary calendar. No

these beauties (a kind gift from the makers, though they can be purchased here), I can hardly imagine my kitchen being without them. The 3-inch sheep's foot paring knife and the 6-inch santoku chef's knife (Bras' favorite) have razor-sharp blades, coated in titanium with a matte finish, and are affixed to handles fashioned from black Pakkawood in the traditional Japanese chestnut shape that sit perfectly in one's hand. They're not just utilitarian tools – they're works of art.