The 2016 Python Challenge (seriously, it's a huge oversight they didn't call it Whacking Day) is coming up in just a couple of weeks and they need volunteers.

Despite its terrible name, the Python Challenge is all about capturing invasive Burmese pythons, specifically in the Everglades, and raising awareness of the problem. Basically, just stop letting your pets loose.

According to the National Park Service, Burmese pythons have pretty much taken over the Everglades. Officials estimate that the current Burmese python population could be anywhere from 30,000 to 300,000. The adaptable constrictors feed on a wide variety of mammals and birds in the Everglades, even the occasional alligator. 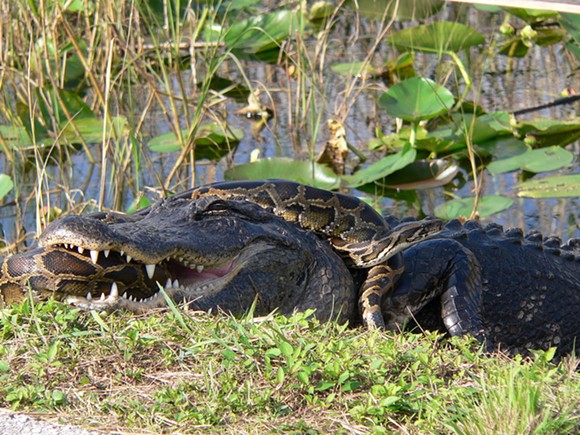 More than 1,600 people participated in the last Python Challenge, which was held in 2013 and only yielded 68 snakes. Weak.

The South Florida Sun Sentinel reports that this year's snake-hunting competition will be closed to the public, meaning only specially trained agents can participate. However, if you can demonstrate snake-hunting skills and pass a criminal background check, you could be part of the action!

This year's Python Challenge prizes have yet to be determined, but in 2013, if you bagged the most snakes you won $1,500, and the hunter with the biggest snake got $1,000.

The hunt will run from January 16 through February 14.