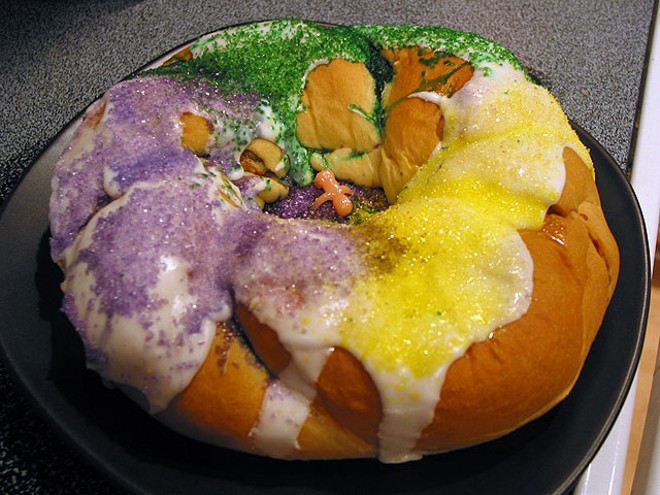 It's time to laissez les bon temps rouler (let the good times roll) since Monday marked the feast of Epiphany (Three Kings Day, to some of you). The real Mardi Gras lineup has been announced in New Orleans, and the pre-Lenten lookalike event that kicks off at Universal Studios on Feb. 6 has released its schedule too (REO Speedwagon — whaaaaaat?).
Luckily, two of Orlando's French bakeries are currently taking orders for King cakes, the buttery, yeasty, brioche-like, cinnamon cake-bread hybrid (or hy-bread, if you see what I did there), that's covered in white icing and bathed in purple, yellow and green sugar crystals. Traditionally, a tiny plastic baby is baked into the cake, and whoever gets him in their slice — if they don't choke on it — is king or queen for the day.

If you can't get your order in fast enough, you can also pick one up at Publix ($5.99 for a small one) that comes "complete" with a couple of strands of Mardi Gras beads, but doesn't come with a tiny plastic baby. (Safety reasons, according to Publix's social media feed, but if you ask for one, the bakery staff will give you one to place inside the cake yourself.) 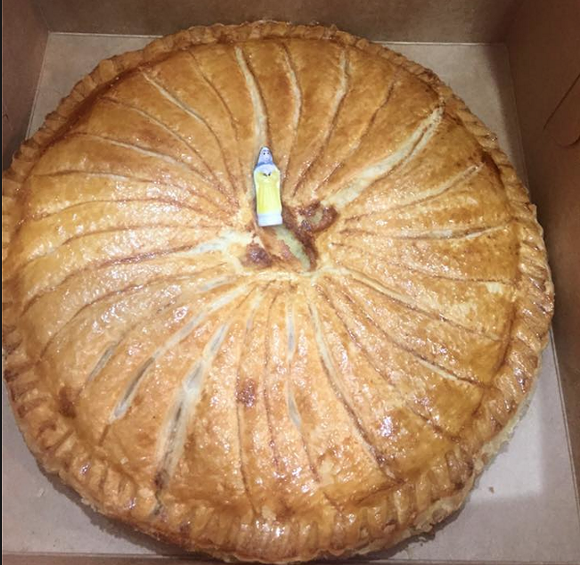 Benjamin French Bakery in Thornton Park is offering King cakes that feed up to 16 not-that-hungry or eight ravenous people for $29.95. Their version, shown above, is more like the traditional galette des rois (King's cake in French), so it won't be as festive-looking as the pre-packaged ones at Publix, and it comes with a tiny Virgin Mary instead of a baby. Haven't decided whether that's more or less unsettling.

Order from Chez Jacqueline in Lake Mary and she'll customize your cake any way you like. It comes out to about $4.50 per serving, since Mme. Jacqueline told me that a cake for eight large servings will run about $36. She also said, though, that she can do individual ones too. How sweet would that be after a massive Creole-theme dinner party? Somebody pass the crawfish.