Pizza Planet closes for 11 months, could The Muppets be moving in? 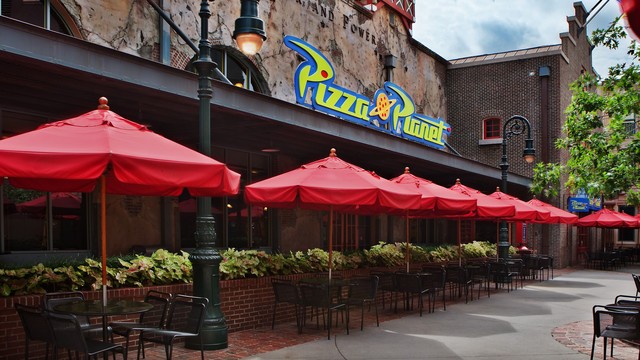 With Hollywood Studios going through a major transition, it’s no surprise that the not-so-popular restaurant Pizza Planet is closing, but what may surprise many is that it looks to be reopening later this year.

While the restaurant features the same name as the arcade restaurant in Toy Story, the actual restaurant looked nothing like the one in the movie. The DHS version took over a pre-existing building and Disney didn’t do much to bring the Pizza Planet theming to the restaurant.

The counter service pizza restaurant and arcade will close Jan. 19 and won’t reopen until Nov. 7, 2016. Disney hasn’t commented on what the refurb will include, but with such a lengthy timeline and with a new Toy Story Land being built on the other side of the park, many have questioned whether it will reopen as Pizza Planet.

Disney Studios in Paris has their own Pizza Planet but theirs looks much more like the one from the movies, with a large single-floor dining room and a pizza buffet similar to a Cici’s (but, obviously, much more expensive). While DHS is getting the new Toy Story Land where Pizza Planet would logically go, the new land is themed as if you’re the size of a toy so the Pizza Planet wouldn’t necessarily fit the theme.

Currently, Muppets are seeing a bit of a resurgence with the new Muppets prime-time sitcom on ABC. That show has been put on hiatus while it gets reworked under the direction of a new showrunner. The show debuted to good ratings, but viewership has declined as the season has continued. A full season was ordered with the final six episodes being delayed until February. There has been no word on a second season, but the reworking of the show points to at least some commitment from ABC.

This isn’t the first time a Muppets-themed restaurant has been in the cards for Hollywood Studios. Back when the DHS version first opened in 1991, there were rumors of a Muppets restaurant. A dining experience based around the numerous Muppets characters is an obvious choice.

The Muppets movie hasn’t aged as well as other attractions, and the West Coast version has been "on hiatus" for a number of years, currently serving as a host for their version of the Frozen sing-along. If Muppets proves to be resurrected with the new sitcom it’s expected that both coasts will get updated films. In California, the Hollywood Backlot area is one of the few areas that didn’t see major updating during the overhaul. A new restaurant could easily be built into the Muppets area there.

We should know what will be included in the refurbishment of our Pizza Planet in the coming months.