The Punknecks serve country-punk with swagger and style (Will's Pub) 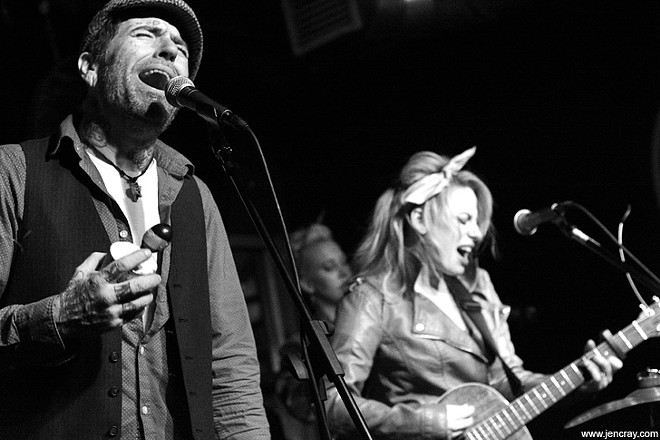 As the name promises, the Punknecks (Jan. 11, Will’s Pub) – aka Jason and the Punknecks – are a country-punk outfit. They’re currently coming out of Nashville, but their caricatured aesthetic is more like outlaw country spirit filtered through L.A. or Vegas. With lots of costume, tattoos and attitude, their deal is part camp and part freak show, but all up in your face. Even though the lead couple of Jason and Polly Punkneck alone packs theatricality in spades, the flair extends throughout the entire four-piece band. Luckily, however, the Punknecks are a little more than just image.

Jason’s frog-voiced singing gives them punk bite, sure. But there are some threads of surprisingly authentic soul in their over-the-top tapestry. And, live, it came almost single-handedly from the fiddle, which lent their songs some deep mountain edge. Glimpses of that straightforward virtue, in fact, could be seen when they led with heart instead of swagger. No doubt, though, that duality – mirrored in the contrasting dynamic between Jason’s gruff bluster and Polly’s Hee Haw-ready Dolly charm – is part of the allure to their fans.