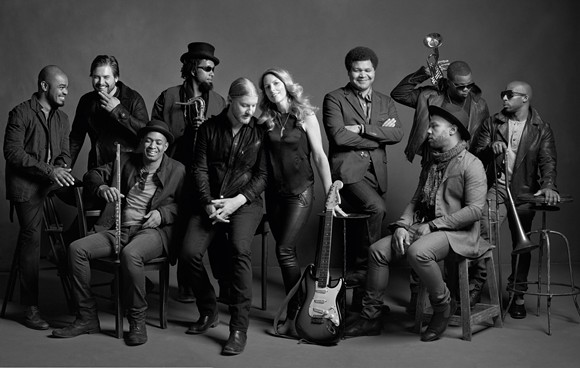 The 2016 Sunshine Music Festival promises a foot-stomping good time for musical pilgrims this weekend. The fest, which takes place in in St. Pete on Saturday and Boca Raton on Sunday, features a comprehensive line up of rock, blues rock, bluegrass and folk acts.

Headliners Tedeschi Trucks Band bring their Jacksonville twang to the main stage with tracks like “Midnight in Harlem” and “Bound for Glory,” as well as a live sampling of their newest LP, Let Me Get By, available to the rest of the world on Jan. 29. Lovers of ethereal, ’90s-era female vocalists à la Shawn Colvin or Natalie Merchant will rejoice at the presence of The Indigo Girls, whose down-to-earth folk rock is best enjoyed while sporting an embroidered vest. Expect appearances by piecemeal rock assembly Hardworking Americans, multi-instrumental slayers Trombone Shorty & Orleans Avenue, saxophone wielding crooners Karl Denson’s Tiny Universe, New Orleans based hybrid rockers The Revivalists, and the infectious lap steel sound of The Jerry Douglas Band. Solo acts Jorma Kaukonen, Bobby Lee Rodgers, and Joanne Shaw Taylor are also slated to serve up all the killer guitar solos and introspective vocals your heart desires.

With two chances to catch the festival and multiple acts playing across two stages, Sunshine caters to a variety of musical tastes ranging from acoustic to gritty, Southern rock to hay-chewing bluegrass and all things in between. If you’re looking for something to tide you over until big name blues rock groups like The Black Keys or folk rockers like Mumford & Sons set their sights on Orlando, it’s worth the drive. If the usual offerings of food and craft beer don’t entice you and harmonica solos aren’t your cup of tea, maybe sit this one out.